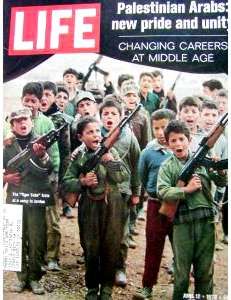 "There can be no keener revelation of a society's soul than the way in which it treats its children.  "
Nelson Mandela

Still think Israel has a partner for peace?

Life magazine documented the Palestinians use of child soldiers as early as 1970. Not much has changed since then. This week, over  3,000 Palestinian teenagers graduated from a Hamas military training program in the Gaza Strip.


Students were taught such life skills as climbing down buildings on ropes, jumping through obstacle courses and crawling under barbed wire. Older students were trained to use light weapons. All Gaza High schools offer terror training as an elective.

“My officer taught me the values of courage, sacrifice and love of jihad, as well as some battle tactics,” said Radwan Wasfi, 15, whose black-painted face dripped with sweat after going through a drill. “I feel that I can free my energy in a good way. I can do for real what I do in video games.”

Hamas’s prime minister, Ismail Haniyeh, who attended the ceremony held at a soccer stadium, said he had ordered his education minister to establish a full-time military college to open next September.

Do you have any doubt that these young Jihadis will be used as cannon fodder during the next skirmish with Israel, simply so the Hate Israel cru can shed their crocodile tears regarding "children" killed in the conflict?