From the Meir Amit Intelligence and Information Center

1.The military capabilities of Hamas and the Palestinian Islamic Jihad (PIJ) were revealed in Operation Pillar of Defense. Those capabilities were the product of massive Iranian support constructed around an arsenal of many thousands of rockets, both standard and manufactured by the terrorist organizations themselves (using Iranian technical knowhow). They included medium-range Fajr-5 rockets (made in Iran) and M75s (manufactured in the Gaza Strip). The massive rocket fire targeting Israeli civilian population centers, including a number of rockets fired at Tel Aviv and Jerusalem, was made possible by Iran's support for the terrorist organizations

2. Aid from Iran to Hamas and the PIJ in the years before operative arrived in the Gaza Strip overland, by air and by sea, facilitated by border-crossing networks of smugglers and merchants. The main route for smuggling arms was from Iran to Sudan and from Sudan to Egypt and into the Gaza Strip through the smuggling tunnels controlled by Hamas. The sea route was also used, as revealed on March 15, 2011 when the freighter Victoria was seized by the IDF. The ship was carrying arms bound for the Gaza Strip by way of Egypt, whose arrival would upgrade military capabilities of the terrorist organizations. Among the weapons on board the Victoria were C704 anti-ship missiles, which could be used to attack not only military and civilian vessels but also strategic targets in the southern Israeli cities of Ashdod and Ashqelon.


3. Until Operation Pillar of Defense, Iran and the terrorist organizations supported by it were careful, for security and political considerations, to keep secret Iran's military aid and the network smuggling weapons into the Gaza Strip. A recent indication of the network and Iran's military support was the exposure of weapons stores in Sudan, which were attacked in October 2012. The media reported that the weapons were Iranian and were intended for terrorist organizations in the Gaza Strip [Hamas and the PIJ].

5. By exposing its military aid Iran hoped, in our assessment, to make political capital at the expense of countries like Egypt, Turkey and Qatar. In addition, the central role of Egypt in the understanding which led to the end of Operation Pillar of Defense caused Iran to fear that existing cracks in the so-called "resistance camp" might widen and the Muslim axis led by Egypt and the Muslim Brotherhood might become stronger.

6. However, as a result Iran, the PIJ and Hezbollah initiated a media campaign showering praise on Iran's military, financial and technical support for the terrorist organizations in the Gaza Strip (See Appendix A). The campaign was joined by Hamas spokesmen, who alongside praise for Iran were careful to reiterate Hamas' independence and lack of dependence on Iran. 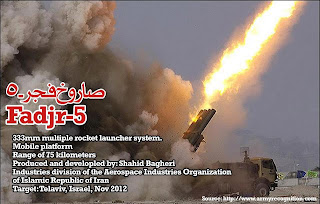