Abbas Hamideh never meet a terrorist he didn't love.
The Cleveland based Israel-hater has even laudified the despicable child killer Samir Kuntar.

Abbas Hamideh described the cowardly Hassan Nasrallah- a man who has called for the  genocide of the of the Jewish people the "most honorable"Arab Muslim leader of our time.

Abbas Hamideh has proudly posed with Rasmea Odeh, the murderer of 2 young men, killed by a bomb she planted in a kosher grocery store in Jerusalem.  He described the unrepentant bomber as  "courageous" and "an inspiration".
Abbas Hamideh has targeted elected officials in their homes. 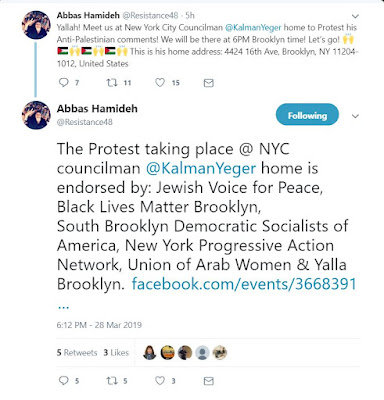 Not the ones he likes, of course. 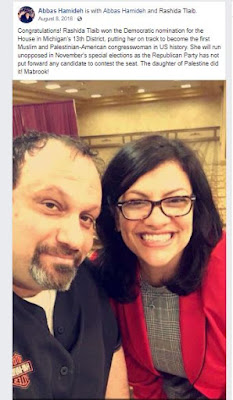 Abbas Hamideh has referred to Ashkenazi Jews as "non Semitic shlomos from Poland".  He has accused the  "cabal" of exploiting the terror attacks against the Jewish community in Monsey.

In an all too crowded field of Jew haters, the Puerto Rican born and raised activist stands apart for his shameless self-promotion, sheer lack of moral compass, and utter depravity.

Don't take our word for it.
Read what the venerable ADL has to say about Abbas Hamideh
The Stop Antisemitism page has also profiled Abbas Hamideh, describing him as "Hezbollah's #1 Cheerleader. 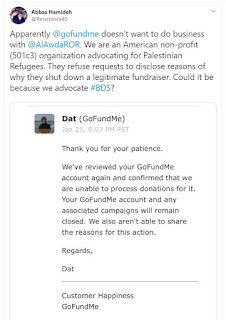 The bloggers at Israellycool ask "I wonder whether this terror-tubby is going to try and call in some help to pressure GoFundMe to reinstate his organization’s account?"

And the answer is yes, he already has.  Its more than interesting who this anti-semite turns to in times of need.

"Thanks for the free advertisement Zionistas! Your whining only creates more support for Palestine! We wish you luck on self destructing!"

He THINKS this is proof of his effectiveness

"How else does one measure success in the Palestinian Movement? If you’re not getting smeared, attacked and have all the Zionist controlled right wing media mentioning you then perhaps you need to try a little harder. Desperate attempts by attacking a noble struggle is proof!"

Not only is Abbas Hamideh a disgusting fat troll of a human being, he is deluded and ignorant

Hamhocks also regularly tells Jews to “go back to Poland” which Tlaib pretends to be so offended by and insists is racist when it’s done to her. Double standard # 477543387433.