Last semester, Bears for Palestine, an anti-Israel group on the UC Berkeley Campus set up a display in the Student Union, glorifying terrorists and Jew-killers. 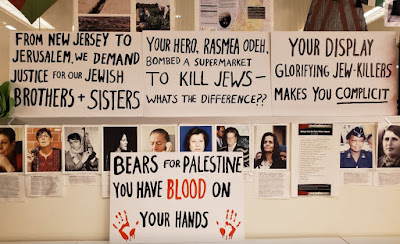 The hateful display and the subsequent direct action by outraged Jewish students was met with indifference by the larger campus community.

It’s hard to feel completely safe as a Jewish person anymore. I find myself second-guessing attending the concerts of Israeli artists, and I never sit by the street window during Shabbat dinners at Chabad. Watching security pile up at the Jewish spaces I call home breaks my heart. Is it really so much to ask that we don’t idolize those that cause this fear and pain in a university building? How can Jewish students feel supported during these dark times when we walk through a campus every day that has posters of our murderers in its buildings?

Maya's weariness is justifiable.   Who are the women being lionized in the Bears for Palestine poster? At least 3 are terrorists who targeted innocent civilians.

Rasmea Odeh of the Popular Front for the Liberation of Palestine terror group confessed to the bombing of a SuperSol Supermarket in Jerusalem, that killed two young men.

Fatima Bernawi placed a bomb in a Jerusalem cinema in 1967.

Leila Khaled also of the Popular Front for the Liberation of Palestine terror group attempted to  hijack two planes in Europe in 1969 and 1970.  In a shameful glorification of gun-violence, the campus display has her holding an AK-47 rifle.

The open glorification of terror on campus, and the subsequent silence from the administration and student body has contributed to an uneasy campus climate at UC Berkeley for members of the Jewish community.

Read Maya's essay in its entirety:  ASUC should condemn Bears for Palestine’s display
Posted by Dusty at 9:25 AM