Protesting a talk on antisemitism at UC Berkeley, because...Israel.

Who protests a talk on antisemitism?

Historian Deborah Lipstadt , author of the books Denying the Holocaust (1993), History on Trial: My Day in Court with a Holocaust Denier (2005), The Eichmann Trial (2011), and Antisemitism: Here and Now (2019) gave a talk at UC Berkeley's law school Thursday, to a packed and appreciative audience.  She is the Dorot Professor of Modern Jewish History and Holocaust Studies, Tam Institute for Jewish Studies and the Department of Religion at Emory University.

The theme of her talk was "Anti-Semitism. Here and Now" 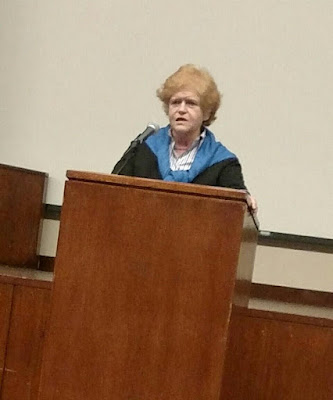 Three sullen protesters stood nearby.  It was not clear what they hoped to accomplish. 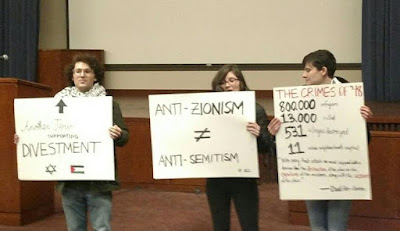 On Twitter, Deborah Lipstadt dismissed the three, saying she had "far more important matters to discuss." at her Berkeley talk
“My talk was about antisemitism here and now. Not about Israel. Three protesters positioned themselves next to me with signs attacking Israel.”

“In the talk, when I spoke about antisemitism from the left, I mentioned that many people refuse to see antisemitism as legitimate.  They dismiss claims of antisemitism as simply being a sop to protect Israel. This is the only prejudice those on the left refuse to take seriously.”

“I want to thank the protesters for making my point more clearly than my words could,” she  concluded. 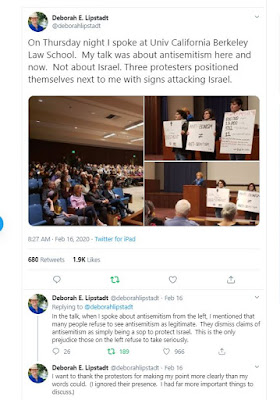 Just think, if Bernie Sanders were to win the democratic nomination and go on to win the presidency you could have your taxes raised so those three leftist BDShole morons can go to college tuition free. Biden, Klobuchar, Steyer please anyone but Sanders!