According to the most current FBI data on hate crimes, released in November 2018, hate crimes targeting Jews and Jewish institutions in the U.S. rose 37 percent between 2016 and 2017 . Although Jews account for just 2% of the population, the FBI data shows that attacks on Jewish people and institutions accounted for 58.1% of religious-based hate crime incidents.

The discussion on anti-Semitism  and anti-Semitic attacks in America have taken on a new urgency since the massacre at Pittsburgh's Tree of Life synagogue. The proliferation of anti-semitic imagery and rhetoric in the media, and in public spaces   comes from the both the far left, the far right.

But not this way.

In a classic  "fox guarding the hen-house" moment,  The UC Berkeley branch of Jewish Voice for Peace  oversaw a discussion on anti-semitism.  Orwell would be spinning in this grave.  The fringe organization that exists to create “a wedge” within the American Jewish community, "while working toward the goal of eliminating U.S. economic, military, and political aid to Israel."  scheduled the event for erev Pesach, all but guaranteeing that Jews wouldn't attend.

From the Jewish Voice for Peace Announcement: 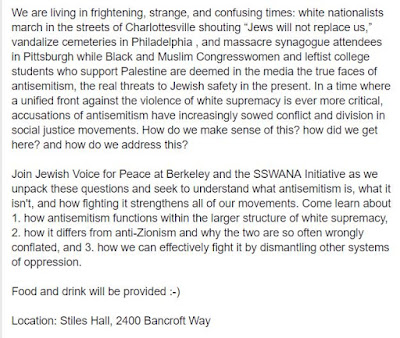 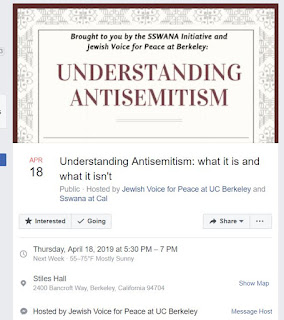 We are living in frightening, strange, and confusing times: white nationalists march in the streets of Charlottesville shouting “Jews will not replace us,” vandalize cemeteries in Philadelphia , and massacre synagogue attendees in Pittsburgh while Black and Muslim Congresswomen and leftist college students who support Palestine are deemed in the media the true faces of antisemitism, the real threats to Jewish safety in the present. In a time where a unified front against the violence of white supremacy is ever more critical, accusations of antisemitism have increasingly sowed conflict and division in social justice movements. How do we make sense of this? how did we get here? and how do we address this?
Join Jewish Voice for Peace at Berkeley and the SSWANA Initiative as we unpack these questions and seek to understand what antisemitism is, what it isn't, and how fighting it strengthens all of our movements. Come learn about 1. how antisemitism functions within the larger structure of white supremacy, 2. how it differs from anti-Zionism and why the two are so often wrongly conflated, and 3. how we can effectively fight it by dismantling other systems of oppression.
Food and drink will be provided :-)
Location: Stiles Hall, 2400 Bancroft Way

The JVP facilitators Anna and Elisa used a powerpoint straight from Jews for Racial & Economic Justice, and made it clear, from the onset, that there was to be no debate of their definitions of "Zionism" or  "anti-semitism."  There was no discussion of the collective trauma that led 12 Jewish groups on campus, as dissimilar as Chabad, J Street U and J Fem  to join in unity against the open anti-Semitism they experienced on campus.  The experiences and very existence of Jews of color and Jews from Arab lands were marginalized.  The indigenous rights movement of Zionism was conflated with white supremacy.  Anna  and Elisa had an agenda to push, and they were going to plow through it,  truth be damned.

We've been promised a full report after the Chaggim.  Stay tuned.

Do you mean Eliza Hollingsworth ? Is she even Jewish?