Freedom House: Israel is the Only Free Country in the Middle East

According to the 2019 report by the human rights group Freedom House, Israel is the only free country in the Middle East.

Founded by Eleanor Roosevelt and Wendell Willkie, in 1941, Freedom House is non-profit, independent watchdog dedicated to "the expansion of freedom and democracy around the world." Its 2019 report on Freedom across the world describes Israel as "a multiparty democracy with strong and independent institutions that guarantee political rights and civil liberties for most of the population".

Again, we must ask why is the only nation in the region that is ranked as free subject to such vitriolic rhetoric across the media, in the UN and on college campuses? 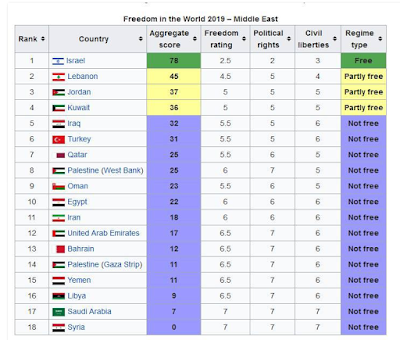 Could it be because it is the only Jewish state, not only in the region, but in the world?