How bad is the New York Times?

Enabling and abetting anti-semitism through biased reporting appears to be a feature and not a bug in New York Times coverage of  the Middle East.


The New York Times cartoon may have been a blunder, but only in the sense that it exposed the extent to which antisemitism has been allowed to creep into the New York Times’ pages.

In the last week alone, Honest Reporting has documented a singular bias in the New York Time's coverage of the Middle East

*On Friday, 19 April, the New York Times published a piece, by a former magazine staff writer no less, about what Jesus may have looked like, referring to him as “likely Palestinian.” Jesus was in fact a Judean Jew, and in his eyes, the term “Palestine” would have been associated with the occupying Roman forces.

*On Sunday, 21 April, a piece by New York Times writers David Halbfinger and Miriam Berger detailing Palestinian fears after the Israeli elections was published. While little in the article was factually incorrect, the article totally omitted repeated Israeli offers to the Palestinians, repeated Palestinian rejections of offers seen by America as generous and fair, and didn’t once mention Israel’s fears.

*Finally on Thursday, 25 April, BDS founder Omar Barghouti was allowed the platform of the newspaper’s letters page to champion his cause and openly call for the dismantling of Israel, the world’s one Jewish state...

If that weren't bad enough, a glance at today's print edition of the New York Times shows the utter contempt they hold not just for Israel, but for the American Jewish community as well.

While we collectively mourn the shooting and the tragic loss of an innocent life at the Chabad synagogue in Poway, California, coming 6 months to the day of the Pittsburgh massacre, the New York Times parked the story on page 25, directing readers to it with a tiny paragraph at the bottom of page one. 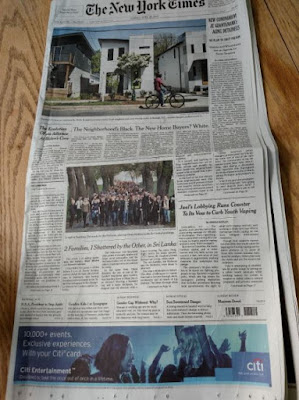 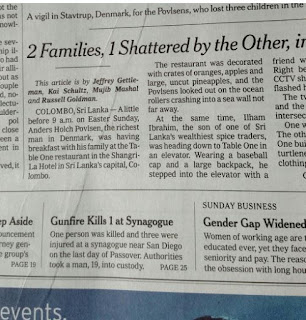 Jews shot dead while worshipping in California does not even merit a page one article in the New York Times.

Outraged at this bias?

Sign Honest Reportings petition: Its time for the media to endorse the internationally recognized definition of anti-semitism .  Its a start.
Posted by Dusty at 10:34 PM