Berkeley's mayor Jesse Arreguin has publicly expressed his opposition to the appointment of Hatem Bazian to the city's Peace and Justice Commission, and has expressed his frustration about his inability to prevent it.

From the J Weekly, the Jewish News of Northern California:
Berkeley mayor objects to appointment of Bazian to city commission

Berkeley Mayor Jesse Arreguin is not pleased with the appointment of controversial UC Berkeley lecturer Hatem Bazian to the city’s Peace and Justice Commission, saying Bazian is not qualified to serve as a public official because of his “anti-Semitic statements and actions.”

Bazian, a lecturer at UC Berkeley and the co-founder of American Muslims for Palestine  has called for an intifada in America, and has spread anti-semitic images and messaging through social media

“There’s documentation showing things he has said that are very offensive and inappropriate and anti-Semitic.  And on that basis, I think it’s a very serious issue about whether this person should be in public office.”

Cheryl Davila, the Berkeley City Council representative from District 2 had also appointed Bazian as an emergency stand-in, in a move that prompted 3 Berkeley Rabbis to write to mayor Arreguin, expressing their deep concerns.   Davila's continued promotion of Bazian, a financial contributor to her campaign, shows her  abject disdain for the local Jewish community

Cheryl Davila is a regular at local and national anti-Israel events, and received financial support for her campaign from anti-Israel activists nationwide.

UPDATE:
Hatem Bazian has circled the wagons and is attempting to orchestrate a response. 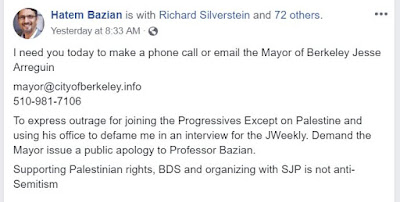 well at least the mayor of Berkeley has some common sense. look at that photo, what a repugnant group of social misfits they are.