After 2 years of intensive lobbying by anti-Israel groups, Airbnb capitulated to the bullies last week, and announced that it would be removing listing of Jewish homes in Judea and Samaria, writing "We concluded that we should remove listings in Israeli settlements in the occupied West Bank that are at the core of the dispute between Israelis and Palestinians. " Only homes hosted by Jews are affected. There are dozens of land disputes and conflict zones in the world, yet Airbnb has only taken action on this one. 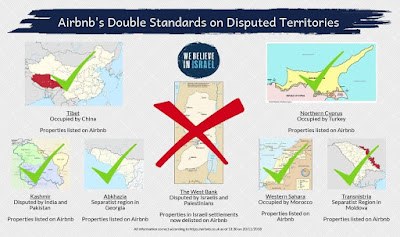 The backlash was swift.

From the Airbnb Community Center Discussion Room
This is the sheerest form of corporate anti-Semitism in recent memory. Not only did AirBNB specifically target “Israeli settlements,” according to Professor Eugene Kontorovich of George Mason Law, they’ve announced that they will only disallow listings in Israeli settlements when those listings are owned by Jews. In other words, if a Jew owns an apartment in East Jerusalem, that won’t be allowed for listing; if an Arab owns an apartment in the same neighborhood, it’s fine for listing.

In the popular media:

From The Spectator:
.Airbnb’s ban on Israeli settlements is shameful

Airbnb has taken the extraordinary decision to stop advertising homes for rent in Jewish settlements in the West Bank. It is extraordinary because Airbnb still advertises places to stay in Tibet, a place many Tibetans consider to be unjustly dominated by China. And in Crimea, recently annexed by Russia. And in Northern Cyprus, a Turkish-ruled statelet since the mid-1970s, which only Turkey recognises as a legitimate state, and to which Turkey has sent huge numbers of settlers in recent decades. Why are Turkish settlers less offensive to the Western conscience than Jewish ones? Why is it OK to rent a holiday apartment in Turkish-settled Northern Cyprus but not in Israeli-settled parts of the West Bank? Anyone?

From the N.Y. Post:
Airbnb’s act of corporate anti-Semitism
Airbnb says: No Jews allowed. The apartment-sharing service has sided against Israel by banning and delisting the apartments of peaceful Jewish civilians living in Judea and Samaria. And that’s not even the worst part.
Nor is the worst part that Airbnb is helping propel the destructive myth that Jews would abandon their claim to the disputed West Bank if only there were enough international pressure.
No, the worst part is that Airbnb has singled out Jews, and only Jews, as the one group in the world that is worthy of such censure. That’s what makes its boycott a naked act of corporate anti-Semitism. 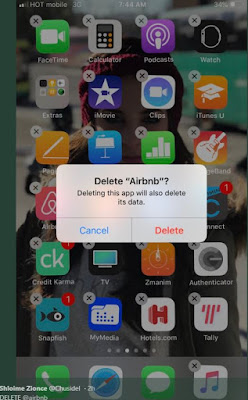 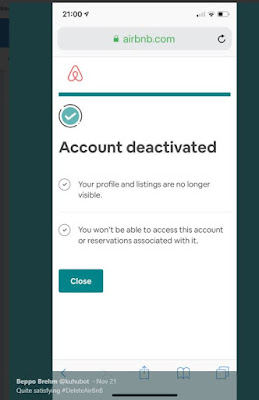 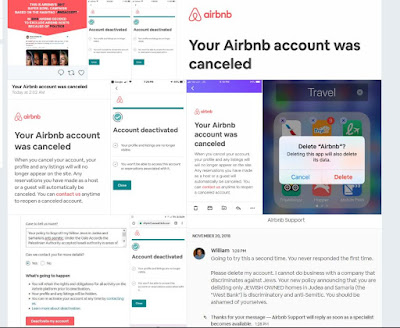 Hosts also began curtailing their relationship with Airbnb
Airbnb is no longer for me – my response to Airbnb – as a so-called “Super Host”Oppose Discrimination by Airbnb
Airbnb’s website claims “Discrimination has no place on our platform.”  But, discrimination now plainly has a major place on Airbnb’s platform, if one happens to be a Jew living or renting a home in the Jewish people’s indigenous, historical and religious homeland, in Judea and Samaria.
Dr. Michael Oren, Israel’s former ambassador to the USA, characterized it best when he tweeted: “Airbnb blacklists Jewish apartments in Judea and Samaria— not Palestinian apartments, not apartments in Turkish occupied Cyprus, in Moroccan occupied Sahara, not in Tibet or the Crimea.  Airbnb’s policy is the very definition of anti-Semitism.  No one should use its services.”
How can you help correct this egregious wrong?
The blog  "Five Minures for Israel" has some suggestions
Posted by Dusty at 11:55 AM

this would be a good time for Ashton Kutcher to speak up he's defended Israel before against the BS from BDS.