Through the wonder of Berkeley's "ranked choice" voting Cheryl Davila found herself on the Berkeley city council.   In the November 2016 election, incumbent Darryl Moore received just under 40% of the 8,000 votes cast in the first round of the ranked-choice ballot. Nanci Armstrong-Temple and Cheryl Davila split the remaining votes 29% and 31%.

The second round of ranked-choice voters gave Moore an additional 446 votes and Davila 1,236 votes, giving Davila a narrow victory margin of just 168 votes. 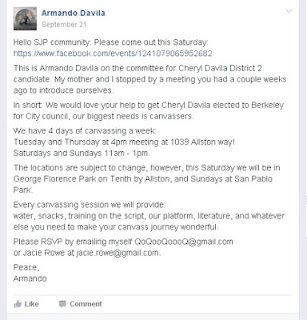 Cheryl has remained active in the anti-Israel camp, appearing at rallies on campus and in front of the local Israeli consulate.  She has apparently been attempting to pay back her campaign debts.


Ben Gerhardstein, a former city transportation commissioner believes Cheryl Davila booted him off the Commission in part because he declined to state his opinion regarding divestment from Israel.
From Berkeleyside:

“You indicated that a non-transportation issue was important to you in selecting a Transportation Commissioner,” Gerhardstein wrote to Davila on Nov. 27 after she informed him by email that he had been removed from the commission. “During our first meeting, you noted that as a Human Welfare and Community Action Commissioner you authored a recommendation to Council to divest from companies benefiting from the Israeli occupation of Palestinian territories, which raised your profile. You said that the issue was important to you and you asked whether I was pro-Palestinian (and supported divestment) or a Zionist. You noted that you were asking all potential District 2 commissioners this question and suggested that you were only interested in appointing divestment supporters to commissions...”

At least two other commissioners serving at the behest of Davila told Berkeleyside the question of Israel and divestment came up during their interviews with Davila....

By dragging her BDS litmus test into the realm of local politics, Davila has again shown her willingness to abandon the very real needs of the people of Berkeley.  Imagine if a Jewish candidate did what Davila has done.  Imagine the calls of "dual loyalty".

Read it all at Berkeleyside.


UPDATE: From Dan Pine, writing in the J of Northern California

According to the City of Berkeley’s published record of campaign contributions, her campaign drew financial support from local anti-Israel activists U.C. Berkeley lecturer and SJP founder Hatem Bazian (currently under fire for anti-Semitic tweets from earlier this year), Barbara Lubin of the Middle East Children’s Alliance, and Donald Wagner from Friends of Sabeel.\

well it should hardly come as a surprise that this anti-Israel devila nut job got her council seat with the help of other anti-Israel nut jobs like BDS Cal berkeley witch doctor hatem bazian (aka bazi the nazi). It also should come as no surprise that this anti-Israel devila nut job seems to be more pro-occupied with using her council seat to promote the BDS agenda as opposed to being a public servant for far more relevant civic matters to berkeley. but hey, berkeley does make people pay more money for soda then most any where else in the country so we can't say they're not getting any thing done that's vital for the public good. i mean really, when it comes to the soda tax you should see my before and after photos.

Revealing quote from the B-Side article that proves Cheryl Davila is a big fat liar
--
Before the election, Moore and Davila had a number of run-ins. In 2015, Moore removed
Davila from the Human Welfare and Community Action Commission after Davila introduced a resolution that called for city divestment in Israel.
Moore has told Berkeleyside in the past that the Israel divestment measure wasn’t appropriate for the Human Welfare Commission, which, he said, generally addresses issues surrounding local poverty. He said he removed Davila for that reason.
Davila said that Moore’s decision to remove her from the commission was her inspiration to challenge him for the seat. She said she has no plans to make Israel divestment an issue once she takes office.