Congratulations to Lian Najami, Rhodes Scholar from University of Haifa

The 2018 Rhodes scholar from the University of Haifa Lian Najami is a perfect example of the diversity of Israeli society, and of intersectionality at its best.

Lian grew up in the  culturally mixed Haifa neighborhood of Ein Hayam. At the age of 12, Lian began volunteering at her  local community center and by her 15th birthday she founded her first start-up.  Fluent in five languages, Lian graduated with a BA in Political Science from the University of Haifa.  She was a foreign policy adviser to US Senator Brian Schatz (D-HI),and was a featured speaker at the Forbes Israel 30 Under 30 Summit in 2016. While at Oxford, Lian plans to research  initiatives designed to promote political inclusion within society emphasizing marginalized groups.

Lian joins 32 other students will begin their studies at Oxford in October 2018.  They were selected from a pool of 866 candidates nominated by their colleges and universities.

Lian Najami was profiled in the Alumni Spotlight of the University of Haifa Magazine, writing

I was first asked to speak to international delegations as a high schooler at Leo Baeck’s youth and co-existence projects.

Since then I have spoken at the University of Haifa’s 40th Board of Governors Meeting, and at functions organized by Combined Jewish Philanthropies (CJP) and Israel Campus Roundtables at campuses across the Boston area, including Williams College, Tufts University, UMass Amherst, Suffolk University, Harvard Kennedy School, Northeastern University, and Wellesley College.

These events enabled me to reach out to students who have no connection to Israeli or Palestinian issues, yet think they must take a side. I try to explain that the reality is very complex. As an Arab Israeli, I tell them that they can be both pro-Israel and pro-Palestinian.

A large number of people are ignorant about the non-Jewish community living in Israel, which comprises 25% of the population.

I try to raise awareness about this demographic reality. The Boycott Divestment and Sanctions (BDS) movement claims that it is helping Palestinians and Arab Israelis. I say ‘thanks, but no thanks.’ What BDS is actually doing is simultaneously damaging Israel and Palestine, and when you harm Israel, you are hurting all of its citizens. Israel has done nothing but help shape the strong person I am and provided me with the help I needed to fully succeed in the Middle East and in life. 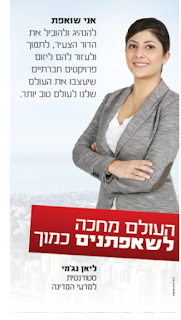 Congratulations to Lain Najami. May she continue to grow from strength to strength.
Posted by Dusty at 11:11 AM