Seattle Blogger Richard Silverstein is enough of a running joke, that assorted bloggers keep a running tally on how many times he has made a fool of himself.  We've got one more to add to the list.

This might be the most complete tally:.From IsraellyCool, a selection  of links pointing to Richard Silverstein’s
Lets chalk this latest one up to unreliability, with a  hefty sprinkling of hypocrisy.  Richard Silverstein has accused  Israeli doctors of killing " tens of thousands of Arab children", by irradiating them as part of the treatment for  Tinea capitis; ringworm, a very common and very contagious fungal infection 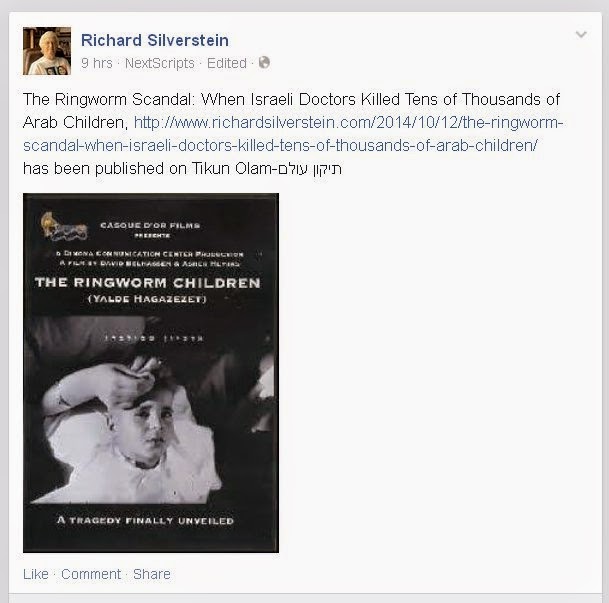 Silverstein is a bit late jumping on the demonization bandwagon for this one.  This antisemitic meme  drifted through the Bay area in 2008, and was soundly rebuked on the hard left's own agitprop site, Indybay

According to a commenter on the site, the standard treatment for ringworm at the time was  radiation. This was an article from a 1949 California medical journal

A recent epidemic of tinea capitis in children  has revived a considerable interest in the methods of treatment of this disease. The most efficacious form of therapy for M. audouini infections is roentgen epilation. Cure was effected by this method in all of a group of 125 cases.

Yes, Silverstein is condemning Israeli doctors for treating patients with radiation, which was considered the state of the art treatment at the time.

Silverstein, knows that the vast majority of internet users, and certainly his intellectually sub-par followers never read beyond the headline.  The  "Arab" children were actually Jews, entering Israel after their expulsion from Arab lands and he is attempting to conceal that fact from the majority of his followers. Its a deliberate, malicious attempt to mislead  his readers, and one of them called him out on it

In just one post we have both shoddy, incomplete research and deliberately misleading use of language, with the specific purpose of demonizing Israel. Could we expect anything different  from Richard Silverstein?


"At that time, many children developed ringworm, a non-lethal condition of fungal origin which affected the scalp. Unlike in other countries, 100,000 Jewish (and Palestinian) Arab children were irradiated in order to treat the condition. While medical protocol of the day directed that no technician receive a dose higher than .5 Roentgen, those treated could received  (sic) a higher dose. A lethal dose was considered 200 Roentgen (R). The children treated received individual doses of 350R. Sometimes they received two doses (for a total of 600R). 6,000 of the victims died within the first year or so after treatment. To this day, many of the remaining victims suffer cancers, epilepsy, infertility and other brain disorders. Even their children have been impacted through genetic abnormalities passed on from one generation to the next."

TREATMENT OF RINGWORM OF THE SCALP


Silverstein’s medical research ranks about par with his historic research.  Psst. Richard, one more thing.  Only germline mutations are inherited, not somatic ones

How typical of Richard Silverstein to publish first, and then ask questions

Plancks Constant has an excellent response to the spurious allegations of the film, The Ringworm Children  here

I like to send him a jab every now and then just for chuckles. He won't post anything I say. I also note that he has 101 reasons to delete readers' comments.

I tried to leave a comment for him, also but he wouldn't publish it