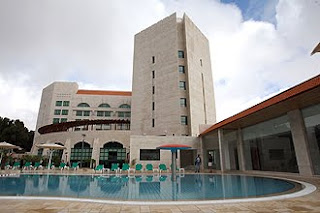 The Movenpick Hotel in Ramallah with its sparkling new swimming pool


Located just minutes away from the city centre of Ramallah in Palestine,close to the city shopping and entertainment district and with a great view over the suburbs of Jerusalem from the upper floors of the hotel, the Mövenpick Hotel in Ramallah is the first 5 star hotel opening in the disputed Palestinian territories. It is a locally owned franchise of the Swiss-based chain.

The 40-million-dollar hotel includes 171 rooms and suites, an outdoor pool, fitness centre and seven conference rooms. The main restaurant has an Italian chef and a downstairs cigar bar that will serve up 20-year aged whiskeys.

Jewish Voice for Peace and others (forgive me if I don't link to them) have described "the acute water shortage among Palestinians in the West Bank" , blaming illegal "Jewish-only colonies (that) fill up their swimming pools while many Palestinian families do not have enough water to grow food or bathe regularly." Will they condemn the Mövenpick Hotel in Ramallah for building a swimming pool that deprives the ordinary Palestinian people of drinking water? Its unlikely.

For organizations like JVP, the diversion of water resources for the Palestinian ruling elite is acceptable and they'll continue to use their initimable smoke and mirrors approach to blame the ramifications on Israel. Just click your heels twice and repeat, "Its all Israel's fault. Its all Israel's fault"
Posted by Dusty at 10:11 AM