A matter of perspective: Israeli and Palestinian treatment of prisoners

The anti-Israel websites are having a field day with the images of Israelis "abusing" Palestinian prisoners. In August, a female soldier exhibited photos of herself on Facebook, smiling next to Palestinian prisoners. Tasteless and inappropriate? Absolutely. The IDF condemned the ex-soldier saying in a statement: "These actions are ugly and callous; details of the incident have been forwarded up the chain of command." More recently, an Israeli soldier was videoed belly dancing next to a female prisoner. And again, this was widely condemned by the authorities.

Bored young people acting like jerks? Yes, it happens. It happens across cultural lines. The unfortunate actions of some thoughtless young people reverberates across the world.

But lets get some perspective here. Do you remember what happened 10 years ago when 2 Israelis inadvertently wandered into Ramallah?
The Israelis were beaten, stabbed, had their eyes gouged out, and were disemboweled. 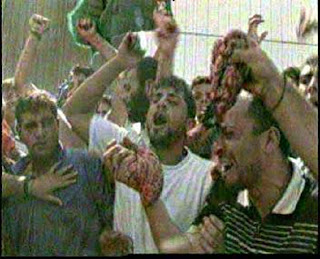 Aziz Salh appeared at the window, displaying his blood-stained hands to the crowd, which erupted into cheers. 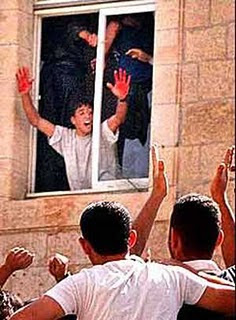 One of the soldier's bodies was then thrown out the window and stamped and beaten by the enraged mob. One of the bodies was set on fire. The mob dragged the two bodies to the city center as the crowd began a victory celebration.

While the immature behavior of some Israeli soldiers is a disappointment to those who know the painstaking training they go through, let's keeps some perspective here. Remembering not only the two Israelis lynched in Ramallah, but the ongoing saga of Gilad Shalit who has been a prisoner of Hamas for over 4 years. No visitation. No contact with the outside world. Solitary confinement. We have no way of knowing the agony of his existence.

And lets remember the ones who cry loudest about "civil and human rights" have consistently remained silent bout Gilad Shalit.
Posted by Dusty at 8:23 PM