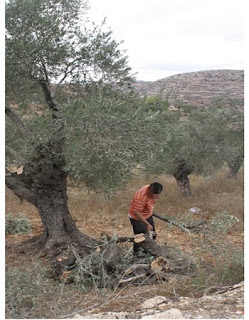 Documented in this article from YNet news:

Arabs and leftist activists staged an attack on Palestinian fields in a bid to accuse settlers of vandalism, an organization that claims to have documented the incident says.

Tazpit Unit members, an organization identified with the settlers which documents news events in the territories says that these staged attacks were meant to falsely accuse settlers of attacking Palestinian land.

"We are talking about an olive grove east of Beit Zayit, located near Route 60," Amiton said."I immediately saw that it was no ordinary pruning, it was done very aggressively...Some of the branches broke and other trees were cut off entirely. When I approached closer with my camera, the Palestinian man waved his saw at me threateningly. I felt uneasy so I backed off".

Tazpit unit director Amotz Eyal said that "during every olive harvest season, just like this one, there are many cases of Arab farmers cutting down olive branches, later blaming it on the settlers."

"Time after time photos prove that these Arabs are not holding back; they provoke in order to tarnish the image of Jewish settlers," he said.

Eyal vowed that Tazpit photographers will continue to document such activities in order to show the public actual events on the ground.


This is not the first time International "peace activists" have been documented destroying Palestinian property, in an effort to demonize the Jews of the region. Many speculate that the International solidarity Movement dresses its activists as Orthodox Jews specifically to stage such events. 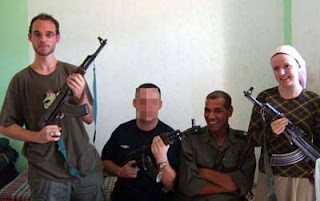 This is nothing new.

"An American-born leftist and liberal rabbi led Arabs and foreign activists in an effort to prevent thousands of school children in the B'nai Akiva movement from planting trees in honor of Tu B'Shevat, the Jewish New Year for Trees.


The children this past week began to hike up a hill at the industrial area of the southern Hevron Hills, between Be'er Sheva and Hevron, in order to plant more than 5,000 pine and cedar trees.

Liberal rabbi Arik Ascherman, a few other left wing activists and several Arabs, stood in their path...."
Ascherman was prevented from continuing.

"As Ascherman left the area, children overheard him say, "There is day and there is night." Two nights later, vandals uprooted approximately half of the 5,000 cedar and pine trees that the children had planted. Footprints leading to nearby Arab shacks indicated the source of the damage."

"How do you explain to children that Arabs uprooted trees they planted with their own hands?" asked Akiva London, an official of the southern Hevron Hills.