The Pat Brown Institute for Public Affairs at Cal State Los Angeles  has released the findings of its recent poll of  Jewish voters in Los Angeles County.  Los Angeles is home to the 3rd largest Jewish population in the world, after New York and Jerusalem.  The  poll is part of a multi-year project to survey diverse racial and ethnic communities in the county, including Asian Americans, Latinx, African Americans, and the Jewish community

1,800 Jews from across the religious and cultural spectrum were interviewed.  Of those,  83% of the sample identified as white, while 17% identified as other than white.

According to the survey, the Los Angeles  Jewish community has a high level of civic and political engagement, with  high voting rates,  high rates of charitable giving, and high rates of participation in the political process.

67% of  Los Angeles County Jewish voters said they consider themselves critical of current policies of the Israeli government. However, nearly three quarters- thee vast majority of respondents said they consider Israel’s existence as a Jewish state to be an important value.
From the survey's key findings: 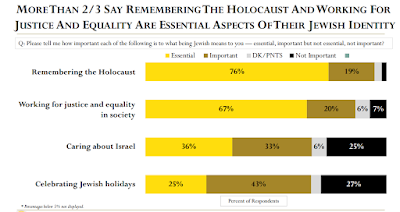 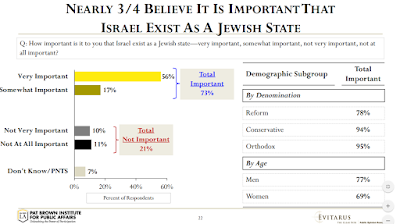 75% of respondents responded that they are concerned about signs of rising Antisemitism.