Open for less than a year, Manny's in the San Francisco's Mission district  has already had a major impact on the local community.  The  "people powered and community focused meeting and learning place" has hosted a multiple of Democratic presidential hopefuls, and  made headlines with its live reading of the Mueller report.    Two debate watching parties at Manny's were standing room only, and were featured on the first page of the Wall Street Journal. 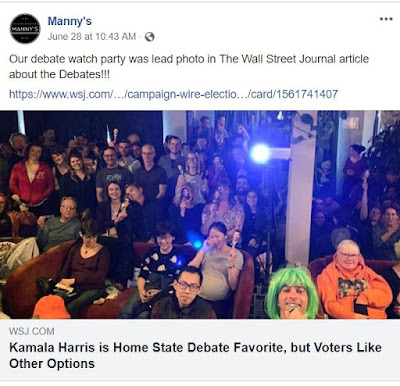 Its no wonder that the San Francisco Examiner proclaimed "Manny's is the perfect business for the Mission".

Yet since its opening, Manny's has been subject to anti-Semitic and homophobic attacks, meant to intimidate both Manny and the community members who patronize his business.  The  business has been repeatedly vandalized- most recently this weekend.

The following screed appeared in several extremist websites and facebook pages.  The author describes the attacks on the business as  a  "low-intensity effort to fuck with Manny’s"

We glued the locks of the gentrifying business Manny’s and tagged a circle-A and “Free Cedar.” Manny’s is run by a Democratic Party operative who worked as an LGBT advisor to the Obama administration and as a top fundraiser for the Hillary Clinton campaign in Silicon Valley. His cafe is a blatant and sinister attempt to co-opt revolutionary sentiments back into the electoral shit show. This wanna-be politician is literally selling books by Frantz Fanon and James Baldwin while hosting live readings of the Mueller Report. He had the audacity, in some fluff piece about the cafe, to compare his tacky self-promotion to the riots at Compton’s Cafeteria and the Stonewall Inn. He fancies his business as a social center for #TheResistance in a neighborhood which has endured brutal waves of evictions and whose long history of actual resistance has been under threat of erasure. Several of the locks we glued were of gates preventing houseless people from sleeping in the alcoves of the business. We hope this small act highlights the hypocrisy of his “civic engagement”.

This attack is a contribution to a low-intensity effort to fuck with Manny’s which has included pickets, wheatpasting, and book expropriation. There is an ongoing boycott of the space, but clearly more action is desired.

It is easy to attack!
Free Cedar!
Go! 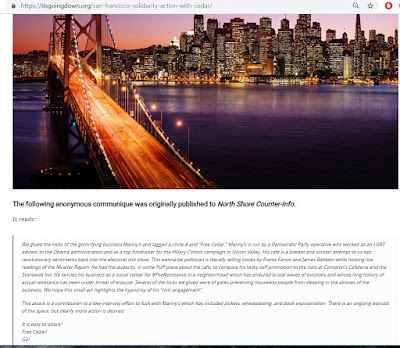 When one of ours is under attack, what do we do?  Get up, fight back.

Show Manny some love and support.

Eat at Manny's.  Go there for coffee.  Host your  book club there.
Become a sponsor, or make a one time donation.
Love him on Yelp.
Go to one of the amazing thought provoking events at Manny's- check out the schedule here.

Manny's ongoing success will be our best revenge.