Protest at the San Francisco Consulate fizzles in the rain.

What if you called for an anti-Israel protest and no one came? 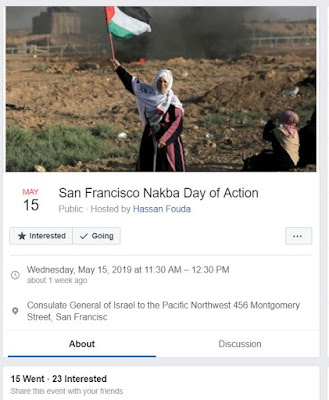 Thats what happened May 15.  Local Israel-hater Hassan Fouda hosted a commemoration of the "Nakba"- the failure of 7 Arab states to destroy the nascent state of Israel in May, 1948. The response was underwhelming.

Hassan may have caught your attention with his fawning admiration for Raed Salah, the leader of the northern branch of the Islamic Movement in Israel, who has served time for incitement after spreading some classic blood libel. Salah's a Holocaust denier and conspiracy theorist,  but that doesn't bother Hassan.
Or perhaps  you've noticed him posing "as a Jew" at local protests.

Hassan continued with his "faith-washing" on Wednesday.  His mini-protest carried a sign from Sabeel and Kairos,  Christian groups with unchristian values.  They seek the end of Israel as the nation state of the Jewish people. 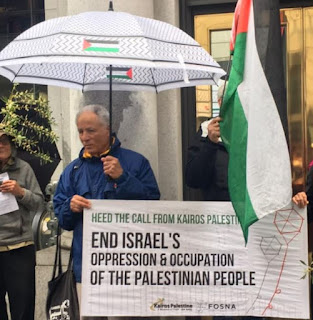 The tiny group stood in the rain in front of the Israel Consulate at 456 Montgomery, largely ignored by those on the street. They vainly attempted to deliver a petition to the consulate, were turned away at the door,  and eventually slunk off, rejected, wet and ignored, down the street.
Posted by Dusty at 6:35 PM