Palestinian Grand Mufti complicit in the deaths of European Jews

Congressperson Rashida Tlaib is now claiming her ancestors provided a safe haven for Jews fleeing the Holocaust. Its simply not true. The Arab leadership in pre-state Israel did all they could to prevent Jewish migration. The Grand Mufti personally prevented 10,000  children from entering the land, dooming them to certain death in Europe

From the Des Moines Tribune, April 26 1961, writing about the Eichmann trial and quoting notes from Dieter Wisliceny, one of Eichmann's former aides.

In 1937 there already was an intelligence connection between the SS and the mufti of Jerusalem, Wisliceny was quoted as having written.


According to Wisliceny, the mufti received consent from Nazi authorities to have a Nazi adviser sent to him after the Axis' expected final victory.

When there was a plan in 1942 to free 10,000 Jewish children to let them go to Palestine the mufti objected according to Wisliceny. 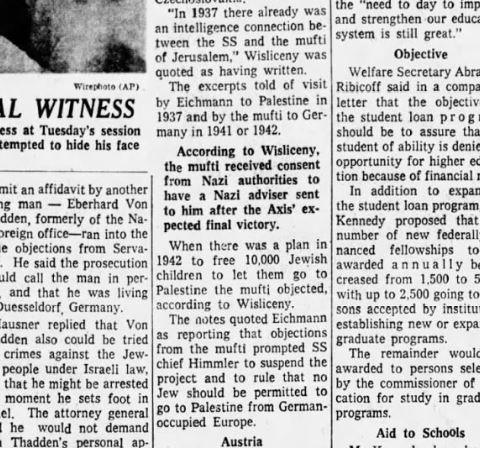 Records from the Eichmann trial show that the Grand Mufti was paid a salary of 50,000 marks a month to foment hate in the region.   Rather than provide the Jews of Europe with a safe haven, the Palestinian Grand Mufti was complicit in their deaths.
Posted by Dusty at 8:37 PM