All's fair in love, war, and in Jewish Voice for Peace fundraising

All 's fair in love, war, and in Jewish Voice for Peace fundraising, apparently.

JVP put a considerable amount of effort lobbying for the defeat of famed civil rights attorney Kenneth Marcus's appointment as Assistant Secretary for Civil Rights at the United States Department of Education.

Ultimately Marcus was confirmed, but JVP still holds a grudge. Enough of a grudge, in fact, to spread this whopper of a lie. Marcus is reopening an investigation regarding a 2011 incident at Rutgers University, in New Jersey.  JVP  falsely claims Marcus has "declared all students who support Palestinian human rights anti-Semitic", and that his motivation in declaring the event anti-Semitic was because  "it included criticism of the Israeli government". 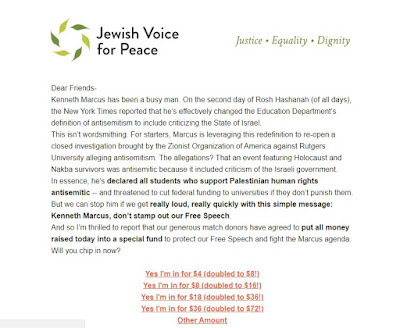 From the New Jersey Jewish News:
Members of the Jewish community and other pro-Israel supporters complained that organizers initiated an admission fee to the Jan. 29 event — which was advertised as being free — in order to prevent demonstrators from attending....

The estimated 500 students and members of the Jewish community who gathered at the Douglass Campus Center outnumbered the 200 or fewer program attendees. While the program was originally billed as being free and open to the public, organizers decided at the last minute to charge a $5 admission fee, in part, according to a number of Jewish community and Hillel leaders, to discourage the attendance by demonstrators who would hesitate to give money to the organizations that planned the event.

From The Jeruslaem Post:
Around 400 pro-Israel students, as well as Holocaust survivors, say they were barred from a public pro-Palestinian gathering at Rutgers, New Jersey's state university, on Saturday night.
"The event page on Facebook [said] that the event was free and open to the public... [and] a suggested donation of $5-$20 would be asked for at the door," wrote Rutgers News Real blogger Aaron Marcus, who led the Zionist students in protest. "Only after 200- 400 pro-Israel supporters showed up did the event – held in a state school, paid for by both tax dollars and student fees – begin to discriminate who could enter the event free-of-cost."
Rutgers student Binyomin Sheis told The Jerusalem Post, "We came straight from Havdalla [the service marking the end of Shabbat], and hardly any of us had money. However, I saw an older woman give [organizers] five dollars, and they gave her money back."
Sheis added that there was also a physical effort to block the group.
From Aaron Marcus at the NewsRealBlog
Only after 200-400 pro-Israel supporters showed up did the event–held in a state school, paid for by both tax dollars and student fees–begin to discriminate who could enter the event free-of-cost.
First, the organizers of the event asked all of those who gathered together in opposition to the event to stand in a separate line and wait for seating to take place. Meanwhile, those in anti-Israel apparel, keffiyahs and hijabs were taken aside, given green wristbands, labeled as event “staff” and given free entrance. At one point, the hosts of the event, which ranged from groups like the International Jewish Anti-Zionist Network to the International Socialist Organization, tore apart a suggested donation sign leaving only the admission fee visible. The group then said students could attend free-of-charge if they became members of BAKA. However, this policy once again did not apply for the Jewish students hoping to attend. In fact, at one point, I signed my name and the woman behind the desk read it and furiously crossed out the information I had just posted.
JVP claims, falsely, that this is a free speech issue.  It is not.   The incident at Rutgers involves differential admission fees based on a religious litmus test.   And that, best beloved, is  discrimination.