They call it the Palestine Exception. Its the belief that being Palestinian enables you to use  your eternal victimhood as a  "get out of jail free" card to evade any moral or civic responsibility.  Reem Assil, proprietor of an Oakland bakery decorated with a mural of a convicted Jew-killer uses it like a master.  Faced with negative crowd-sourced reviews for her Oakland restaurant, Reem denounces them as "racist" targeting her "Arab owned business" and mobilized a response.

Reports of dirty restrooms?    There are zionists afoot.
Small portions?  Only a zionist would complain.
Cold, bland food?  Only a jealous Zionist would make that claim.
The Palestine Exception means criticizing cold coffee is "racist", if its served in an Arab owned business.

The Palestine exception means never having to take personal responsibility for your actions. 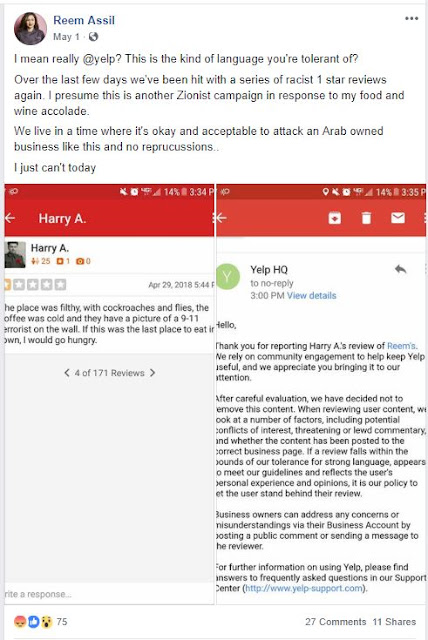 David Jaber takes Reem's bait, and explains how to "drill down" and report the profiles

The Palestinian Exception means that Israel haters across the world have rushed to Reems defense, linked by their common hatred of the Zionist entity.   Emma Rosenthal freely admits she has never eaten in Reem's restaurant. yet posts a review, in violation of  Yelps' terms of agreement.  And yes, Emma Rosenthal calls unapologetic Jew Killer Rasmea Odeh,  "a hero" 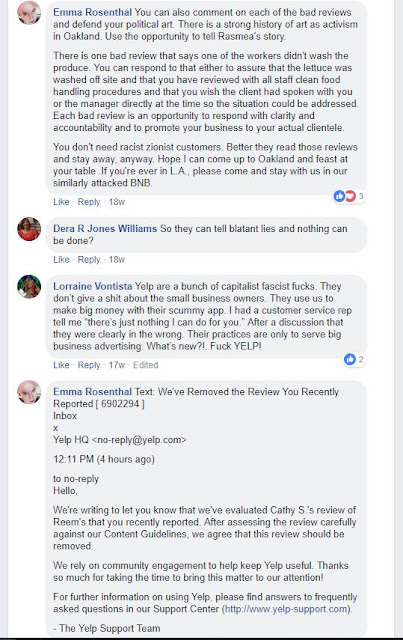 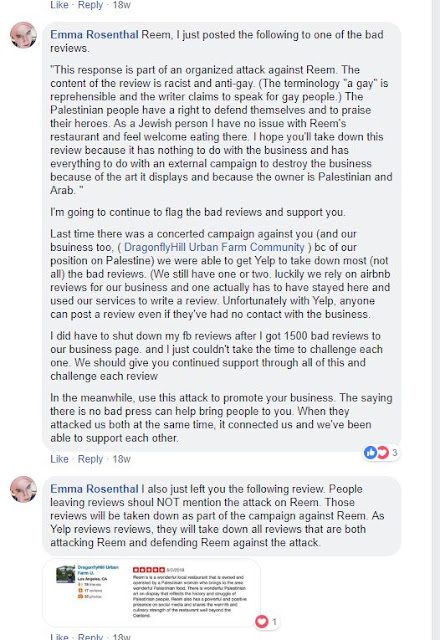 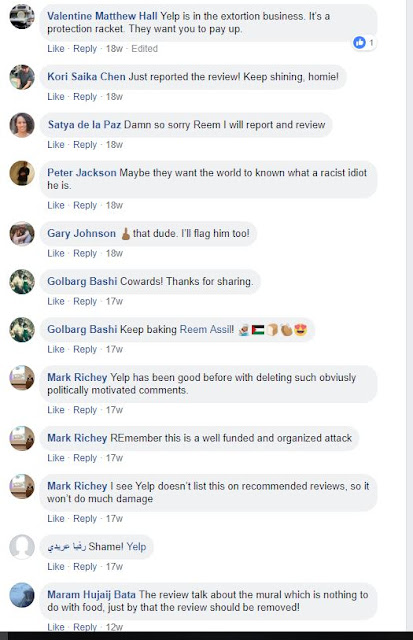 Within days of the Reem initiated manipulation, many of the negative reviews had vanished from Yelp.  This form of blatant manipulation dilutes the Yelp brand, and makes all their reviews suspect.

The way to win in Reem Assil's world is to Cry "Zionist" and let loose the dogs of war.
Posted by Dusty at 6:21 PM

Thanks for spreading the word. How typical of Reem Assil to play the race card. Remind her that everyone loves Arab owned Zaytoon, because the owners aren't jerks. Everyone loves Ikes sandwiches, because Palestinian Ike Shehadeh isn't a jerk. If Reem Assil finds herself on the receiving line of blog posts like this, its because she's a vile terror supporting jerk who publically glorified a Jew-killer. Its really that simple. She should apologize, own up to her jerk-dom, and make ammends to those she has wronged.

I dont live in the area, and cant comment on the actual restaurant, but I read the reviews Assil was complaining about. They aren't political. Someones bread was burnt. Someone's lettuce was unwashed. The lines were long. Service was slow. Her blaming poor reviews on "Zionists" is a cop-out. If she wants better reviews she should train her staff. Practice better hygiene. Make more flavorful food. That, not having her friends write fake reviews is the secret to sucess.

That Yelp review posted here talking about the cockaroaches was the funniest thing I’ve read in recent memory thanks for sharing.

Shlomo- Its a cafe in an Oakland BART station. Cockaroaches are the indigenous inhabitants.