Israel again has made the "Best Countries" list for 2018.

The methodology behind this ranking is explained atthe U.S. World and News Report website:

The study and model used to score and rank countries were developed by Y&R's BAV Group and The Wharton School of the University of Pennsylvania, specifically professor David J. Reibstein, in consultation with U.S. News & World Report.
A set of 65 country attributes – terms that can be used to describe a country and that are also relevant to the success of a modern nation – were identified. Attributes by nation were presented in a survey of more than 21,000 people from across the globe. Participants assessed how closely they associated an attribute with a nation.
Each country was scored on each of the 65 country attributes based on a collection of individual survey responses. The more a country was perceived to exemplify a certain characteristic in relation to the average, the higher that country's attribute score and vice versa. These scores were normalized to account for outliers and transformed into a scale that could be compared across the board. 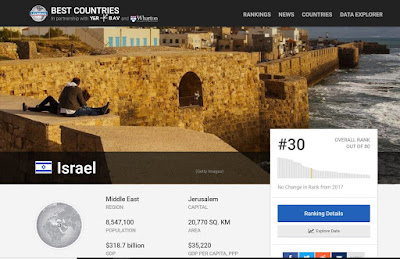