When is a BDS fail spun as a BDS success?  All too often.

The New Orleans City Council has just rejected a one sided and biased divestment resolution condemning Israel in favor of a wide reaching statement for human rights.  That doesn't stop the BDS holes from claiming victory. 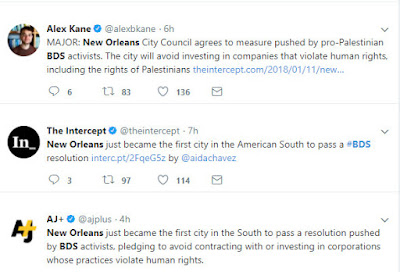 The actual text of the resolution makes no mention of the Israeli/Palestinian conflict at all, and makes it quite clear that New Orleans rejects discrimination by national origin 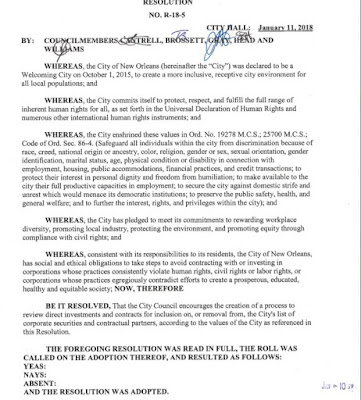 The original petition by the New Orleans Palestinian Solidarity Committee, to be delivered to the New Orleans City Council  looked quite different.  The truth optional petition was signed by only 305 people and  proclaimed the usual laundry list of scurrilous claims against Israel:

"The City of New Orleans should use the full extent of the law to seek competitive suppliers of goods and services who do not have investments, licenses or operations in Israel.

New Orleans is a social justice city that should no longer support segregation or racism. With your support, we can make New Orleans an Apartheid-Free City.
We must remove all products and divest from all companies directly supporting the illegal Israeli occupation of Palestine.

Israel illegally confiscates privately owned Palestinian property; imprisons Palestinian citizens for years without charge; and uses checkpoints to restrict the movement of Palestinians, even during childbirths and medical emergencies.

In Gaza, the situation is even worse because citizens are denied access to food and medicine due to the Israeli-imposed blockade. The infrastructure also has not been rebuilt since the 51-day assault on Gaza in 2014, Operation Protective Edge, which killed nearly 1,500 civilians.

Since its recognition as a state in 1949, Israel has violated over 30 United Nations Security Council resolution, which are legally binding.

In 2015, the United States gave Israel $10.2 million a day in military aid alone. That means that last year the US spent nearly $4 billion on Israel’s military. This funding, provided by American taxpayers, allows the military to maintain it’s illegal occupation of Palestine, carry out military assaults on Gaza, and use military grade weaponry to “police” Palestinian territory.

The city council has the opportunity to make known their grave concern regarding Israel’s official system of segregation and repression of non-white Jewish Israeli citizens, Israeli citizens of Palestinian descent, and Palestinians living in the West Bank and Gaza. New Orleans should no longer be party to contracts, licenses, or investments with the apartheid state of Israel. Consumer goods contributing to the illegal Israeli occupation must also be banned."

BDS is a discredited tactic from a discredited movement, desperate for success  and perfectly willing to lie.    The New Orleans City Council wasn't fooled  by them.  You shouldn't be either.

The Jewish Community of New Orleans clearly disagrees with my interpretation, and has issued this statement

The Jewish Community Relations Council of the Jewish Federation of Greater New Orleans (Jewish Federation) expresses its deep disappointment in the New Orleans City Council’s adoption today of resolution R-18-5. Since its creation 105 years ago, the Jewish Federation has always stood for supporting human rights and combating racism, anti-Semitism, xenophobia, and other injustices. However, in a patently undemocratic and unfair procedural move, today’s resolution was passed without any public knowledge, six hours into the Council’s session and after the suspension of rules to add this untimely resolution to the agenda, and without the opportunity for dissenting voices to be heard for a broader discussion. These stealth tactics divide communities and do not provide for an equitable forum whereby all voices can be heard.Just hours earlier, in the Council chambers, the Jewish Federation presented to the City Council about the contributions of the Jewish Federation and the impact of our Jewish communal organizations throughout the greater New Orleans area. While the Jewish Federation fully supports the values of human rights expressed in the resolution, we are deeply concerned about its unintended consequences relating to Israel and in bolstering the divisive BDS movement. The BDS movement, which has inherently anti-Semitic components, is designed to challenge Israel's economic viability and very right to exist.We look forward to working with the current Council, the newly-elected Council Members, the Mayor-elect, and the public to address these concerns, to further educate our civic leaders, to ensure all voices are heard, and to avoid a potential chilling effect on both discourse and the growth and economic development of the greater New Orleans area.

It's a good start.

And if you would stop justifying your ungodly, inhuman, anti-Jewish occupation of a land that does not belong to you, that would be a good start too.

The Jewish people- in fact over 40% of the worlds Jewish population calls Israel home now. And until the Arabs and their anti-Israel enablers (like you) accept that, there will be no peace. But Israel will defend herself. You can count on that.