Reem's: Quashing constitutional rights in the name of "Community"

On July 25, another vigil was held at Reem's, in what appears to be the latest in an ongoing series of actions. The peaceful low-key lunch hour event was again disrupted by a blatant attempt to infringe on the groups constitutional rights of freedom assembly and freedom of expression 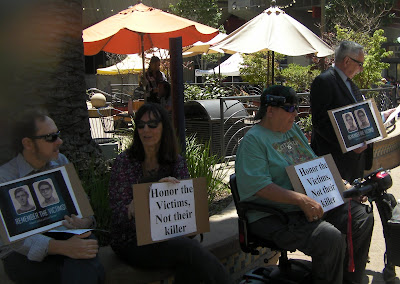 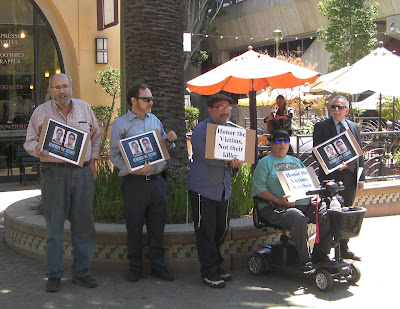 And again, Reem Assil's reaction to a non-violent protest was to call  "security" 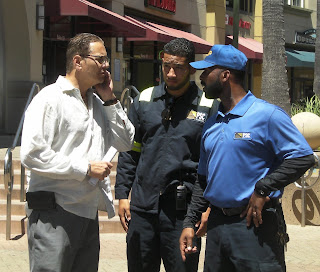 However, there are no trained security guards at Fruitvale Village.

According to the East Bay Express, several years ago, the Unity Council, the non-profit that owns Fruitvale Village decided to end its contract  with Universal Protection Services, a unionized security company. Instead, the trained guards were replaced with "neighborhood ambassadors" -workers without guard cards or formal security training.

Reem Assil and the Unity Council are now relying on these "neighborhood ambassadors" to curtail the civil rights of the lawful protesters. The ambassadors from the Safety Neighborhood Ambassador Program (SNAP) are employees of Peralta Service Corporation, a subsidiary of the Unity Council, and are clearly uncomfortable being asked to infringe on people's constitutional rights

UPDATE:
Legal Insurrection posts more details of the legal protections afforded to the vigil in California in their article Anti-Israel activists try to shut down protests over California bakery honoring Palestinian terrorist

In an important 1980 case, Pruneyard Shopping Center vs. Robins (447 U.S. 74, 80), the SCOTUS upheld the general claim that citizens have no free expression rights in private shopping centers, but found that state constitutions could confer broader speech rights, if they so desired, permitting free speech in these private arenas.

Pruneyard involved a group of California high school students who were denied permission by the manager of a private mall in Campbell to man a table, hand out leaflets, and collect signatures for a petition against the virulently anti-Israel and antisemitic UN General Assembly Resolution 3379, which determined that ‘Zionism is a form of racism’.

The Court stated that the student group had the right to set up a table, and approach passersby in order to solicit names for their petition, discuss the issue, and distribute their literature because the broadly worded California Constitution does in fact give citizens the right to speak and assemble freely, and to petition, including in private malls.

That is, the Supreme Court recognized that state constitutions may provide more protection than the U.S. Constitution does when it comes to speech in privately-owned malls.


Particularly relevant for Reem’s protesters is a 2007 case (Fashion Valley Mall, LLC vs. NLRB, 42 Cal. 4th) which held that the state’s constitution even protects “non-commercial expressive activity” in shopping centers that involves advocating for the boycott of a store or business there. More recently, a 2013 court of appeal decision held that

"a shopping mall must allow protests within aural and visual range of a targeted business whenever the mall is open to the public.”