San Francisco's iconic Bound Together bookstore has a mural, captioned "History remembers 2 kinds of people. Those who murder and those who fight back."

Reem Assil has chosen to adorn her Fruitvale bakery cafe with the likeness of one who chose to murder. 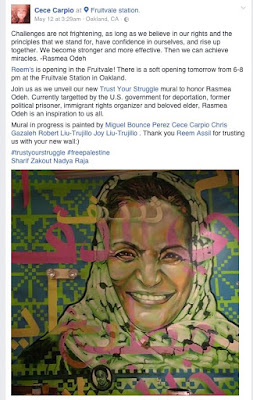 Fortunately, Oakland has chosen to fight back.   This weekend, a group gathered to "Honor the victims, not their killer" , in what organizers promise to be the first of many informative vigils, speaking to the community about why the mural of Rasmea Odeh was so hateful. 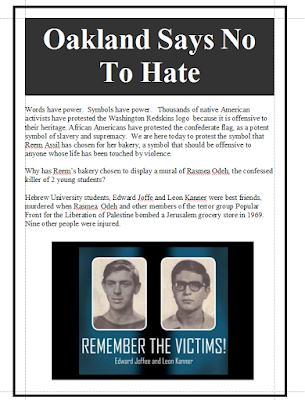 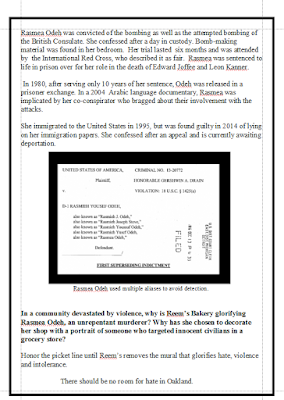 In response, Reem Assil called upon her political allies for support. 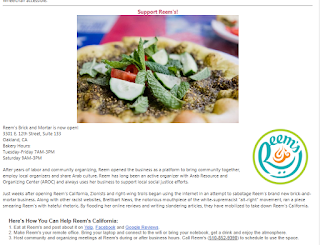 The non-violent vigil was brutally attacked, and signs and flyers were ripped out of people's hands. 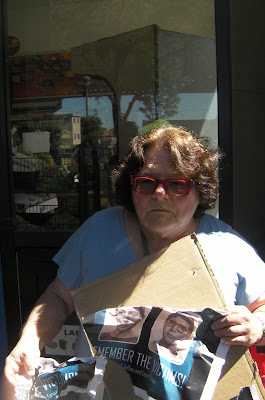 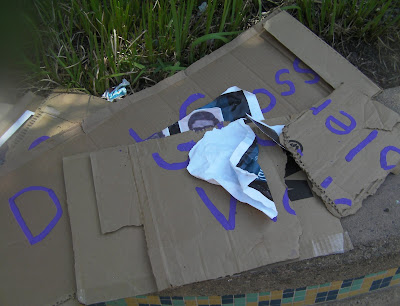 Again we see how in Israel, and in Oakland, violence is justified as a means to an end. Innocent citizens shopping in a grocery store or simply exercising their right to peaceful assembly and free speech are equally at risk.

Reem called for reinforcements. Sara Kershnar from the IJAN showed up. Lara Kiswani from AROC was there. JVP goons were there as well.

A woman in a wheelchair was assaulted by Assil's goons. An elderly woman had a sign ripped out of her hand.

Two members from the Oakland community filmed the events and provided the footage to the police. Hopefully arrests will be made.

I'm pretty sure the woman in pink who attacked the grey-haired lady is Ellen Brotsky from Jewish Voice for Peace.

Also- did you notice Sara Kershnar leading the assault, then whipping on her National Lawyers Guild Legal Observer hat when the police came?

When will you make the film public?

I was there- they surrounded that poor woman in the wheelchair and wouldn't let her go- I felt so bad for her. They had her trapped, then they attacked her. I called the police and emailed them the footage I took. I also sent it to KRON. I hope they will use it. I can't believe the police let those people go when there were so many witnesses.

If KRON doesn't use the footage I want to get it to the poor people who were attacked- maybe they can use it in a civil case against the restaurant. Do you know how to contact them? Thx.

To Anonymous 10:06. Send me your contact info- it will not be made public. Comments are moderated, and I will delete the info to protect your privacy.

i wont give the name of the disabled woman to protect her identity, but i know her and she is a wonderful woman and would have done nothing to provoke the attack. its too bad that reem's is closed on sundays so that the protest happened on shabas, or i wouldve stood beside them. let them try to attack an able bodies male

Please let me know when the video is available so I can post it on Fousesquawk.

We are well acquainted with the NLG and their legal observer caps. They have a chapter attached to the UCIO Law School and they accompany the SJP when they disrupt Jewish events at UCI.

Get the footage into the hands of Tucker Carlson, Sean Hannity, Dennis Prager and/or Glenn Beck.
This thing needs national attention. Yelp already came to Reem's aid and more self-loathing Jews than I care to imagine! TAKE IT HIGHER! ZERO TOLERANCE FOR TERRORIST SUPPORTERS IN THE USA!!!!

This needs national attention. I left messages and reviews on Reem's FB before she pulled the ability to post a review. Yelp came to her aid by deleting all reviews that spoke out against the disgusting "Ambience" of her place. This needs to get into the hands of Tucker Carlson, Sean Hannity, Dennis Prager and Glenn Beck. One or all of them will help get this national attention! We DO NOT tolerate open support for terrorists in the USA!!! She won't remove the mural? CLOSE HER DOWN!!!!!
Use your connections if you have them!!!

The protest needs to be bigger, louder and more organized.

Here's an idea: Reem's is asking people to request to use the space for a community orgaizing event in the screenshot above. Let's organize a pro-Israel, Zionist event and when she rejects it, the restaurant can be sued under Federal civil rights laws for discrimination.

The goal isn't to "shut down" Reem. The goal is to get her to understand how hateful her messaging is.

What if she accepts it? Can you imagine the (cough) very special ingredients she'd put in the Jooooos food?

"special ingredient" ? Are you think of the Thanksgiving gravy scene from Orange is the New Black?