In 1938, the United States Department of Agriculture sent Walter Clay Lowdermilk to the “Near East” to make a survey of land use. These photos are from his book,  Palestine, land of Promise, published in 1944, which examines  the “geological setting of these these areas, the state of their population, and the present achievements of Jewish  agriculture and industry” 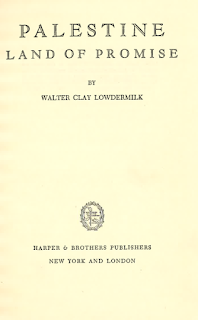 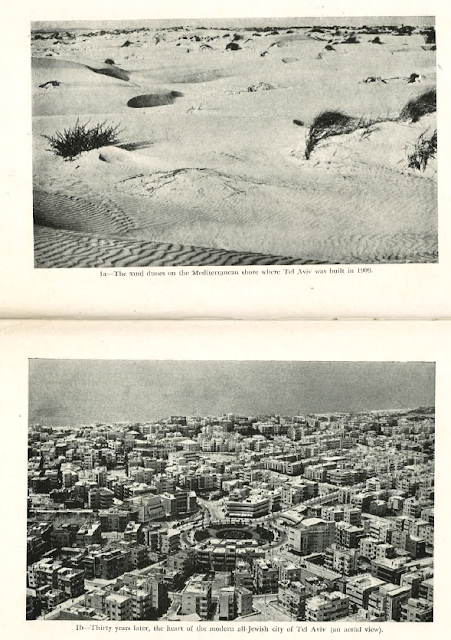 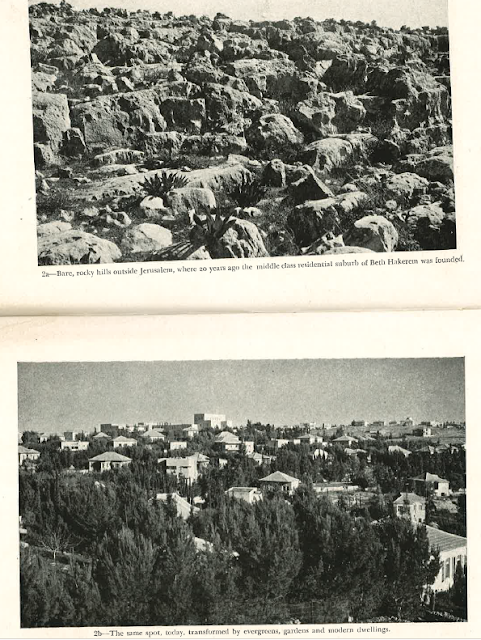 Before and after reforestation: 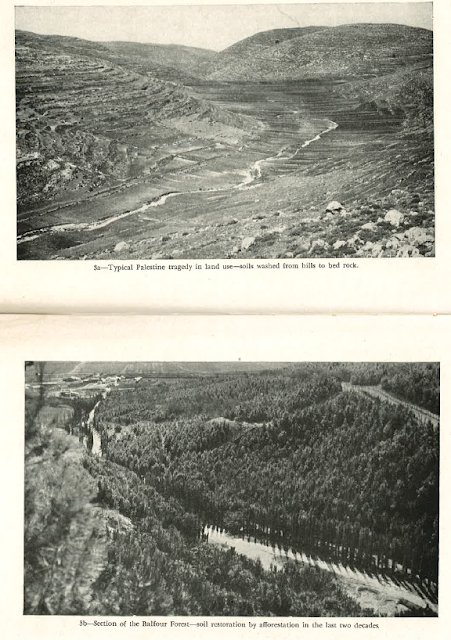 ...the newcomers in Palestine became pioneers, building their own economy in a backward and neglected land...These pioneers in Palestine found the country denuded of trees and depleted of its natural fertility.

With an innovative spirit that persists even today, the Jewish community began transforming the land using scientific agrarian methods

(p.91) The Arab cow gives about 800 quarts of milk a year, but the cows in Jewish settlements average 3500 quarts,  while some prize specimens among them give more than 5000 quarts yearly.

(p.92 )The native Arab hen is a scrawny fowl which lays an average of 60 small eggs a year. Jewish settlers have introduced the leghorn hen and crossed it with native breeds,The resultant new strain is heavier and lays an average of 150 large eggs per year.

(p.94) The most outstanding achievement of Palestinian agriculture is the scientific production of citrus crops... The Arabs quickly adopted the modern methods of the Jews and together the two communities have built up a citrus industry which before this war made Palestine the second largest citrus exporting country in the world.

It was not just the land that prospered- it was the people as well.

(p.151) In the course of 18,000 miles of automobile travel through the Arab lands, I was impressed by the relative progress made by Palestinian Arabs as compared with the Arabs in neighboring countries

(p.152) The higher wages paid in Palestine have attracted considerable numbers of Arab immigrants and seasonal laborers from other countries. According to a government estimate the non-Jewish immigration to Palestine, both legal and illegal was between 25,000 and 30,000 in the period between 1922 and 1925.

(p.157) Arab infant mortality is rapidly declining in all of Palestine but it is lowest in the localities closest to the Jewish settlements.The reduction in the death rate is due in part to the health work of the Palestine government but must be attributed mainly to the activities of the Jewish health agencies,among which Hadassah, the American Jewish Zionist Organization has played the outstanding part.

(p.228) ...a people with faith and devotion born of a long tradition has changed desolation into fertile fields, fruitful orchards and reforested slopes. Ancient cities have been rebuilt and the commerce on their streets quickened, long-unknown resources have been brought into the light of day and sent to the distant marts of the world. After centuries of darkness which crushed the hopes of Palestine's miserable inhabitants, a new force has come into the land and made it live again. The possibility of a new day for the entire Near East is hidden in the fertile fields, the flourishing villages and cities, the co-operatives and the factories of Jewish Palestine
Posted by Dusty at 7:42 PM