"My Name is Rachel Corrie" at San Francisco's Magic Theater

The one-woman show "My name is Rachel Corrie" is playing at San Francisco's Magic Theater in Fort Mason on a 2 week run. The play includes excerpts from the diary of Rachel Corrie, an International Solidarity Movement (ISM) member who was accidentally killed while guarding smuggling tunnels in Gaza

Even with the deep discounts offered to Jewish Voice for Peace members, there are plenty of tickets still available. 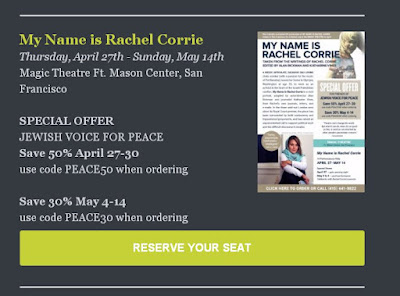 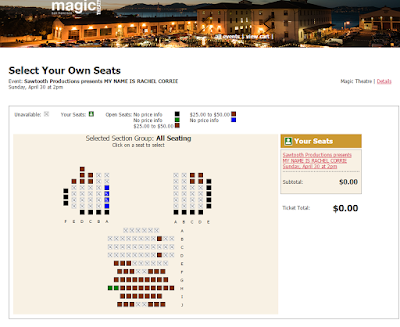 The play “My Name Is Rachel Corrie,” currently running in San Francisco, omits all context, portraying that period of the Israeli-Palestinian conflict only through Corrie’s eyes.

Rachel Corrie’s death was accidental and deeply tragic. A 23-year-old American student decided to come to Gaza, a war zone in 2003, to stand in solidarity — but in solidarity with whom? From 2001-2005, hundreds of rockets a year were being launched from Gaza at the Israeli community of Sderot, using materials brought in through tunnels just like the ones Corrie was trying to protect by serving as a human shield. The bulldozer that tragically ended her life was there to uncover one of 90 tunnels that terrorists were using to smuggle weapons into Gaza.

She was deliberately placed in a war zone as part of a strategy by the International Solidarity Movement, whose founder George Rishmawi boasted “…if some of these foreign volunteers get shot or even killed, then the international media will sit up and take notice.” As detailed by the Israeli watchdog group NGO Monitor, the ISM has a lengthy history of working with Hamas and knowingly placing foreign volunteers in situations where ISM leadership knew that they could be injured or killed.

Dozens of innocent Americans have been killed in acts of Palestinian terror.  Their stories remain untold. If you know the name "Rachel Corrie", but don't know the name Taylor Force or Daniel Wultz then you aren't paying close enough attention.
Posted by Dusty at 7:24 AM

would it surprise anyone that a suspected London terrorist turned out to have been one the participants of the 2010 terror flotilla? just another case of some fake activist eventually showing their true colors http://www.israelnationalnews.com/News/News.aspx/228786

well, no sunday afternoon matinee prices for the dozen or so morons who want to travel to San Francisco and watch this propaganda trash. i've got a spoiler for you all, My Name is Rachel Corey and i learned the hard way why areas where heavy construction vehicles are operating have posted warnings for unauthorized personal not to enter. and by unauthorized personal that includes leftist terror supporters who decide it's a good idea to get directly in the path of moving bulldozers.

This is NOT a Magic Theater production. Please make this clear. The Magic Theater facilities were rented by a production company for the showing of "My name is Rachel Corrie".

This arrangement was made by a management team no long associated with the theater, and the theater was contractually obligated to fulfill the prior arrangement.