Power Grab: As Hamas and the PA posture for political gain, the Palestinian people suffer.

As Hamas and the PA posture for political gain, the Palestinian people suffer.

In anticipation of his meeting next month at the White House Palestinian Authority (PA) President Abbas has taken steps to pressure Hamas to accept PA authority over Gaza.  Presidential and parliamentary elections have not been held  for over a decade.

"I think there is a golden and historic chance to regain the unity of our people... Hamas should relinquish control of Gaza."

The PA  has been increasing the  pressure on Hamas by withholding the fuel  from Israel that powered Gaza's only generating plant, and by slashing the salaries of its 60,000 civil servants in Gaza by 30 percent.  These employees in Gaza do not work, but continue to draw salaries.  Hamas refuses to buy fuel from the PA for the Gaza power station because of a dispute over taxation. It shut down two weeks ago, plunging the people of Gaza into darkness.

Now,the Palestinian Authority has told Israel that it would no longer pay for the electricity Israel supplies to Gaza.   Israel supplies Gaza with 30 percent of its total electricity needs at a monthly cost of $11 million.  Less reliable Egyptian power lines also provide a portion of Gaza’s electrical needs. In an effort to avoid a humanitarian crisis, Israel did not immediately cut off the electrical supply.  The United Nations has also allocated $500,000 for the purchase of emergency fuel for Gaza’s 13 hospitals and 54 medical centers.

Electricity shortages have led to protests in Gaza. Cuts to the power supply affect the water supply. Sewage is flowing into the sea.

Fuad Al-Shobaki of the Palestinian Authority's Petroleum Authority blamed Hamas for manufacturing  the crisis, saying  Hamas was unable "to cover their inability to manage the Gaza Strip."

The fuel shortage is one more problem for Hamas-controlled Gaza, which is already dealing with soaring unemployment and a lack of drinkable water.

In 2016, the PA’s budget was $4.14 billion, of which the Gaza Strip’s share was $1.65 billion. Hamas continues to divert this funding  to weapons and terror tunnel, in preparation for their next war against Israel.

Eylon A. Levy of i24 News explains the Gaza energy crisis on Twitter: 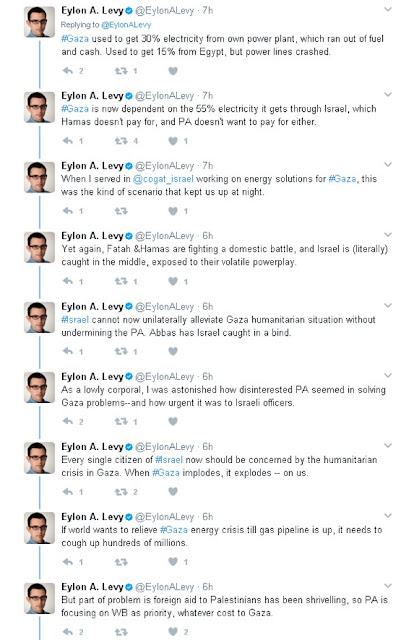