One of the "peace activists" from the Mavi Marmara has surfaced again.

Khalid Omar Ali is being held in custody in London on suspicion of terrorism.The 27-year-old man was arrested carrying knives near Prime Minister Theresa May's office by British police. He was detained as part of an intelligence operation. It was reported that a concerned family member contacted the police.

Reports indicate that Khalid Omar Ali was one of the "peace activists" aboard the Mavi Marmara, a ship in the 2010 Gaza flotilla. The ship was attempting to run the naval blockade of Gaza. After Israeli soldiers boarded it, they were attacked. The resulting scuffle left 9 dead.

Anti-Israel activists still maintain the Mavi Marmara was an aid ship, manned by peace activists
Khalid Omar Ali is currently detained under the Terrorism Act and is in custody in a London police station. 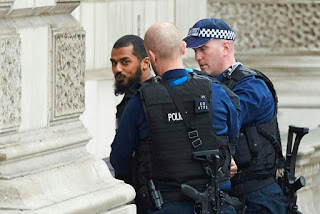 and just think, Netanyahu paid out 20 million to the families that spawned nearly a dozen of these fake activist terrorist animals as part of a so called reconciliation deal with turkey. that same turkey which is sliding deeper and deeper into Islamism thanks to erdopig who now has more power then ever. last i heard turkey also banned wikipedia.