Muhammad Zoabi is coming to Berkeley.

Muhammed Zoabi is coming to Berkeley. 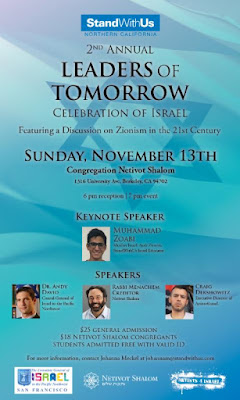 Muhammad Zoabi, a self described  “proud Israeli Arab Muslim Zionist” will be the keynote speaker in a fundraiser for the Israeli advocacy group, StandWithUs.

The Israeli-Arab teenager was forced to go into hiding  after he publicly expressed support for Zionism and the State of Israel. He took refuge with terror-survivor Kay Wilson.

Outspoken bravery runs deep in the Zoabi family. His mother Sarah Zoabi was a contestant on the television broadcast of Master Chef Israel  and declared “I believe in the right of the Jewish people to have their own country, which is the state of Israel, the holy land....I’m sure that the people who hear me will say: ‘what, have you lost your mind? How can you say you are a Zionist?’ I want to say to all the Arab [citizens] of Israel to wake up. We live in paradise. Compared to other countries, to Arab countries – we live in paradise.”

Muhammad  will be joining the IDF next year, and has declared "I am proud to be part of Israel, its people and for sure in the future, our DEFENSE forces."

Nov 13.
Congregation Netivot Shalom, Berkeley
Posted by Dusty at 8:21 AM