Its Pallywood at its nadir and its nothing less than shameless exploitation of a disabled child, by an official of the Hamas government in Gaza.

Someone who ought to know better- Dr. Basem Naim,  the Former Minister of Health of Gaza has sent out a photo of a disabled toddler, claiming the boy was a victim of "Israeli terror".

Nothing could be further from the truth. The child in this photo is Mohammed Al-Farra., who is living in Israel's Tel Hashomer hospital after being abandoned by his family. 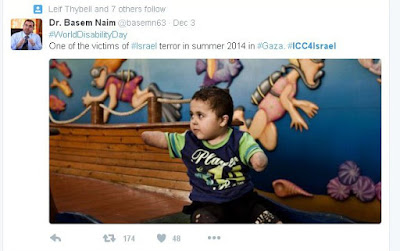 Born in Gaza with a rare genetic disease, Mohammed's hands and feet were amputated because of complications from his condition, and the 3 1/2-year-old carts about in a tiny red wheelchair. His parents abandoned him, and the Palestinian government won't pay for his care, so he lives at the hospital with his grandfather.
"There's no care for this child in Gaza, there's no home in Gaza where he can live," said the grandfather, Hamouda al-Farra.
This cynical, exploitative and fraudulent image has been retweeted 179 times.
Here is the photo in its original context  from the Times of Israel 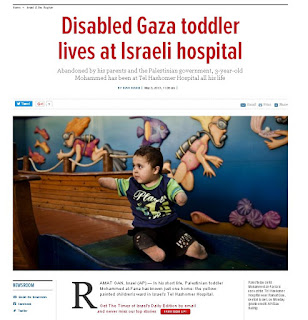 This isn't the first time Mohammed's image has been used to demonize Israel,  but to have the Former Minister of Health of Gaza spreading the lie makes it particularly egregious.

They spread this garbage on Tumblr daily. The BDS movement is also active, they see no irony in spreading their BS on a platform created by a Jew.