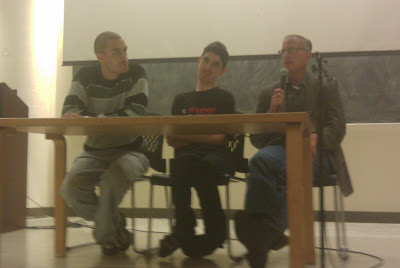 British Hip Hop artist, LOWKEY, International Solidarity Movement member, Jody McIntyre, and former Princeton University political science professor , Norman Finkelstein spoke at Kresge College at UCSC on May 12, 2010 claiming " over 1400 Palestinians were killed in Gaza" and that “between 500 and 700 were civilians.” Photo by Becky Johnson.


NOTE TO READER: In the Winter War of 2009 against Hamas, the IDF was accused of slaughtering innocent Palestinians. The IDF always proclaimed they took great precautions to protect innocent civilian life. I wrote about discrepancies in the Gaza death toll from that conflict on my blog, "Becky Johnson: One Woman Talking" in September of 2009 which you can read here: http://beckyjohnsononewomantalking.blogspot.com/2009/09/idf-reports-251-death-discrepancy-and.html. With this revelation by Hamas leaders in the Arab press confirm what I predicted all along.

Posted by Becky Johnson at 8:35 PM

Bloggers have gone through the names of those killed in Cast Lead, and cross referenced them with names of those "martyred" on jihadist sites- they reached the same conclusion years ago.
Elder of Ziyon at http://elderofziyon.blogspot.com/2009/04/more-of-those-civilians-killed-in-gaza.html keeps a running list The numbers represent the position they were on the PCHR list of casualties, and the links go to sites that prove they were not civilian (many of the ones at al moltaqa and alqassam include pictures of them with rockets and in uniform)