The California Legislative Jewish Caucus  has issued a statement regarding the initial draft of the Ethnic Studies Model Curriculum (ESMC), which will be open for public comment until August 15, 2019.

Once revised and approved, California’s ESMC will serve as the standard for public classroom instruction across the state. In its current form, the draft curriculum is inaccurate and misleading in several critical respects and reflects an anti-Jewish bias.
We are working with our allies in the legislature and our Jewish organizational partners to improve the current ESMC draft so that we may adopt a curriculum that is appropriate for all of California’s children.
According to the statement, the current draft curriculum effectively erases the American Jewish experience, omits any meaningful discussion of antisemitism, denigrates Jews, and singles out the state of Israel for condemnation

The California Legislative Jewish Caucus concludes:
It would be a cruel irony if a curriculum meant to help alleviate prejudice and bigotry were instead to marginalize Jewish students and fuel hatred against the Jewish community.  Without significant edits the ESMC will do just that. 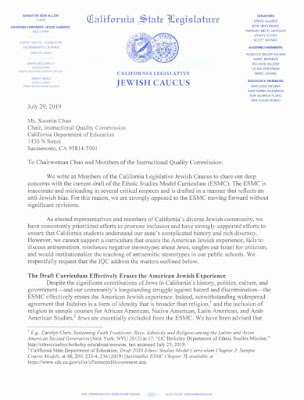 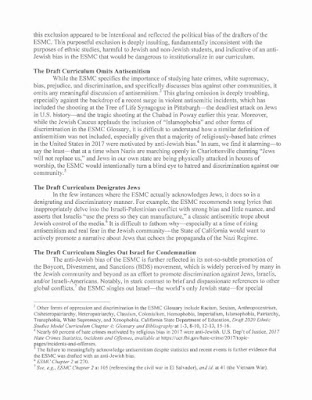 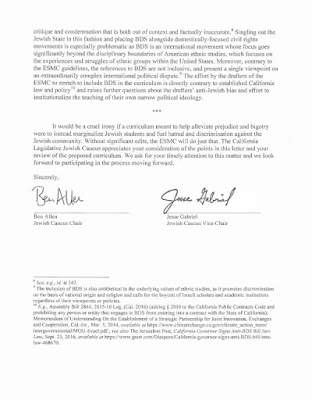 ya know, it's a shame that the general public will never really understand how the most insidious form of anti-Semitism works these days and how it's largely practiced by the radical left. when they think of anti-Semitism their minds far more often then not go to shit like nazis from WW II or white nationalists marching late at night with tiki torches. and although that sort of more overt form of anti-Semitism which is largely practiced by the far right (as well as islamic radicals ironically) presents a more immediate threat, leftist anti-Semites play the long game.
that includes history revisionist bullshit meant to disassociate the Jewish people from their historic and ancestral home land like jeremiah wright's claim of Jesus being a "palestinian". or tamika mallory refusing to condemn farrakhan even in the midst of whatever the latest public anti-Semitic screed he happens to have unleashed while proclaiming him as being the greatest of all time. or rashida tlaib claims of how arabs in The British Mandate of Palestine were so welcoming to Jewish Holocaust survivors prior to 1948 when you know she's goddamn aware of the collaborative relationship between hitler and the mufti which resulted in the deaths many would be Jewish refugees. and how about those infamous tweets from ilan omar or AOC's comparison of nazi death camps to the detention centers on the boarder? as shitty as those detention centers are that is a grossly inappropriate comparison. and let's not forget that ALL the following leftist nut jobs mentioned in my comment thus far are hard core BDS supporters.
this proposed "curriculum" is not even subtle in what it's designed to do. it's nothing but an indoctrination program to cultivate the next generation of leftist BDS anti-semites. and the saddest thing about it all is that most people out there who don't have a clear understanding of the history of anti-Semitism or the Israeli/arab conflict will never really understand this covert form of anti-Semitism. they'll never really be able to see past the facade that radical leftists use as cover to push their anti-semitic agenda.

“Increasingly, discrimination against Jews
[especially in the academic world, as a result
of the BDS movement] is regarded as legitimate
whether or not there is any connection to Israel.”

Similarly, neo-Nazis in Germany have begun using the phrase “Israel is our misfortune,” a sentiment that converges with the German [Leftist] Green Party’s explicit support for BDS.

The crossover between the two streams was seen recently when a founder of the Green Party spoke at a neo-Nazi event.

“[IUMS Trustee Sheikh Hassan Ould] Aldo and the [Muslim] Brotherhood use language similar to what Hamas used in its original charter, which rejected any peaceful coexistence.

To them, Palestine is part of a waqf, a holy Islamic trust, that no person can negotiate away.”

“Past incidents have seen [Iran-backed] Hezbollah operatives scope out Israeli targets in countries as far away as Peru.”

Tunisian Prime Minister Youssef Chahed
Has banned the wearing of the niqab
[Islamic] face-veil in public institutions
“for security reasons.”

QUESTION: When will Europe and North America
follow their wise example, and ban the niqab?