California's Governor Gavin Newsom has unequivocally apologized for the California draft model curriculum, agreeing that it "was offensive in so many ways, particularly to the Jewish community.”

From his office in the Capitol building, Gov. Gavin Newsom last week made a full-throated apology to California’s Jewish community for a controversial ethnic studies draft curriculum that erases the Jewish story in America and takes unsubtle digs at Israel.

The draft, said Newsom, “will never see the light of day.”

In spite of the widespread criticism, some of the drafters of the curriculum have doubled down, calling for a rally and press conference next Tuesday, and accusing the groups marginalized by the curriculum of  attempting to "dilute" it. 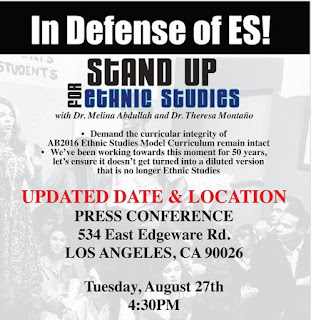 On her Facebook page,  Guadalupe Carrasco Cardona, an educator at the Edward R. Roybal Learning Center and one of the drafters of the curriculum, referred to those asking for inclusion as "loud ass critics",  and pointed out that anti-semitism as a form of oppression is mentioned in the draft.

Anti-semitism is mentioned only once in the 300 page model curriculum, while Islamphobia is mentioned 59 times. 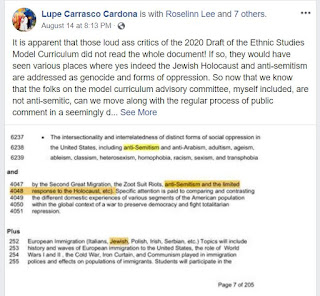 The draft ethnic studies curriculum as it is written furthers discrimination and bigotry towards one of the most marginalized people in the world. Rather than mock the critics of the model draft curriculum, Cardona and her colleagues should take the time to read the public comments and take them to heart. In the meanwhile, the Jewish community and its allies are grateful for the leadership of Governor Galvin Newsom, and the California Jewish Legislative Caucus.

here's a good youtube of Newsom's Israel trip back in 2008. please go there and voice your support amazingly no Jew hate comments yet despite the video having been posted over 10 years ago..
https://www.youtube.com/watch?v=ONzWXPW9c6c