Fighting back against Hate in El Sobrante

El Sobrante,  a sleepy Contra Costa town of 13,000 has found itself in the national spotlight when one of its residents, Steve Johnson, built a giant swastika in his front yard.  The 10 foot by 10 foot swastika has created a huge uproar on Lindell Drive, a once quiet street of modest and well-tended homes.

In interviews with the local media Johnson, a 65 year old retired welder has claimed the swastika is a symbol of “peace tranquility and harmony. ” He has claimed  "It's a Tibetan sign that's way back before swastikas were invented" Asked whether he is Tibetan, he replied: "I could be.” He has also stated  "I like swastikas…I think they look cool. I didn't do it to get attention. I'm not a worshiper of Nazis. I just thought it'd be a cool thing to put in there."  Eventually, Johnson declared "I own this house I'll put what I want. It ain't none of your guys' business" .

Johnson’s proclamation of innocence  regarding this symbol of Nazi Germany, associated with the deaths of 17 million people, including 6 million Jews flies in the face of this post on his Facebook page 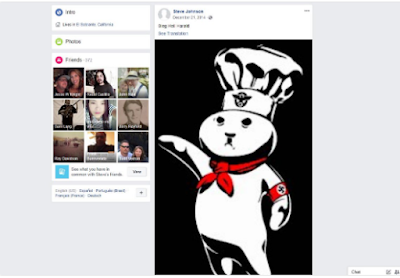 An online petition  was started, urging Johnson to remove the concrete symbol, which he claims cost $800 dollars to install. Thousands have signed.

We live in El Sobrante and are grateful to live in a small community with such diversity of race, religion, and ethnicity.

Then we heard that in June, 2019 a member of our community erected a 10 foot by 10 foot swastika in his front yard. A swastika, which once was a religious symbol, is now widely recognized as an international symbol of hate. In the last 100 years, under the banner of the swastika millions of Jewish, Roma, gay, and other people were brutally slaughtered.

The presence of a swastika in our community makes many people feel unsafe to live in a community that tolerates visible expressions of hate and bigotry. Therefore, we are calling on this person to remove the swastika.

We came together and took a stand in our community when hate reared its head in the past. Many businesses and homes have a Not In Our Town: El Sobrante sign posted. We are speaking out now to show our neighbors that we want to keep El Sobrante as a welcoming community, free of intolerance and hate.

Please add your name and circulate to your neighbors.

Steve Johnson seems surprised and unprepared for the backlash. He claims his car and two pickup trucks have been egged, and his answering machine has been filled with messages from unhappy neighbors.   Johnson has recently covered the swastika with blankets

What can to do to fight back against open displays of hate and intolerance  in our community?

Please sign the petition, and show up on June 20, for a community wide rally sponsored by El Sobrante Indivisible,  between 4-6 pm at the corner of San Pablo Dam Road and Appian Way
(Near 4071 San Pablo Dam Road)