It wasn't surprising- late last month, he had posted this notice on his Facebook page. 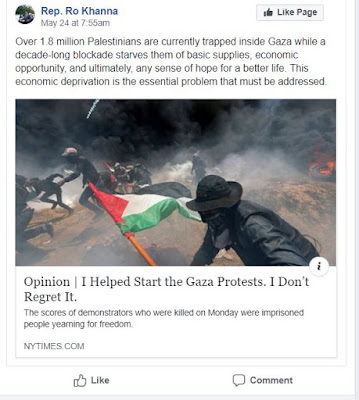 Almost immediately, thank you posts from as far away as Ramallah began pouring in- spurred on by  Jewish Voice for Peace and other anti-Israel groups. 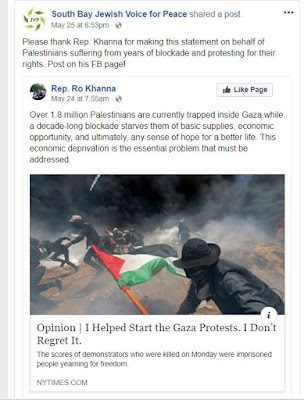 Its not just Ro Khanna- Jewish Voice for Peace is spending increasing time and efforts on trying to  frame the message with our elected representatives.   Because only constituents can send emails, and the Congressional contact forms precludes "cut and paste" messages, JVP  asks people to call the  Washington office directly 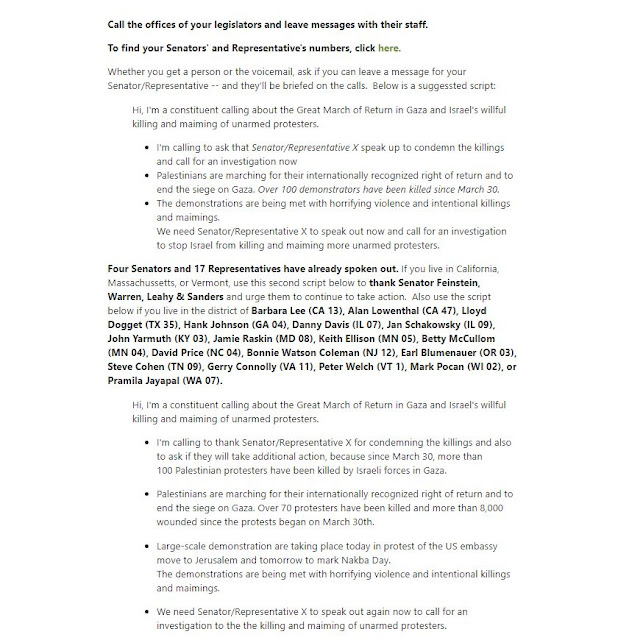 Its time for an equal and opposite response.  Its time YOUR elected representatives heard from you.  The primary elections are June 5.  If you care about the future of Israel, make a point of knowing how the candidates stand.   Once they are elected, make sure they hear from you.

Khanna's response to a request that he open an investigation into Israel's actions at the Gaza border: (apologies for the imperfect transcription) 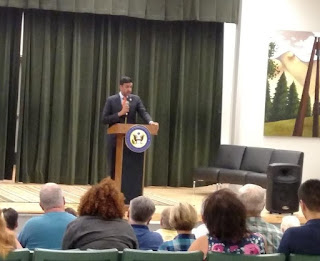 Let me make a few comments about your question and the broader situation in the Middle east.

The first mistake that was made why in the world would you provoke violence by moving the embassy to Jerusalem.  And if you are going to move the embassy to Jerusalem  why would you do it on the day of Nakba which Palestinians and others view as a day of occupation and put salt ion the wounds. Its almost as if the government the administration was totally indifferent to the protests and the violence that was going to happen.  Total indifference.  people say protesters were coming over then they can apprehend- Israel has the right to guard its borders and apprehend its protesters but let this be clear the criticism of Benjamin Netanyahu should not be equated with a criticism of Israel or Jewish values.  Most Jewish values and most Jewish people do not support... (incomprehensible)  Imagine if people,  I don't think our own administration would go this far but who knows. Imagine if people were coming over the border from Mexico and were protesting and coming over the border  would we ever give our border guards say "shot them".  Even If they were throwing rocks over, no. We say detain them or arrest them send them back,  No one is saying Israel doesn't have the right to defend its borders but the force and  the use of force has to be proportionate.  And to say that you can't speak up. People say Ro, why are you speaking out for the human rights of people in Gaza when you care about the US Israel relationship.  Im speaking out for the human rights of people in Gaza precisely because I care about the US Israel relationship and there are many Jewish Americans and people that care about the relationship with Israel who also want to see peace and justice and the recognition of human rights.  So what I would say I would call on the progressive, the liberal, the people in Israel like in the tradition of Shimon Peres or Yitzhak Rabin, the human rights organizations within Israel which exist to hold Netanyahu and that government accountable and to...its a foreign country I can't tell them who to elect but to fight for progressive values like so many of us are fighting for in this country.  That said I still believe that Israel will remain a strong ally of the United States and I support the innovation and the technology and that relationship biut I think it will be on much solid  foundation rooted in human rights and I think Netyanyahu has done incredible damage to that relationship.
Posted by Dusty at 7:27 PM