Nothing is as damning of Gilad Atzmon as his own words:


"American Jewry makes any debate on whether the ‘Protocols of the Elders of Zion’ are an authentic document or a forgery irrelevant. American Jews do control the world."

"We must take the accusations that Jews are trying to take over the world with utmost seriousness. Israel is the Nazi Germany of our time. In fact, Israel today is worse than Nazi Germany."

"I'm not going to say whether it is right or not to burn down a synagogue, I can see that it is a rational act. "

" I think Jewish ideology is driving our planet into a catastrophe"

Gilad Atzmon's  repugnant Jew-hatred has met with condemnation from groups as diverse as the ADL and Jewish Voice for Peace. He'll be back in the Bay Area Oct. 3, speaking at the North Berkeley branch of the Berkeley Public Library. 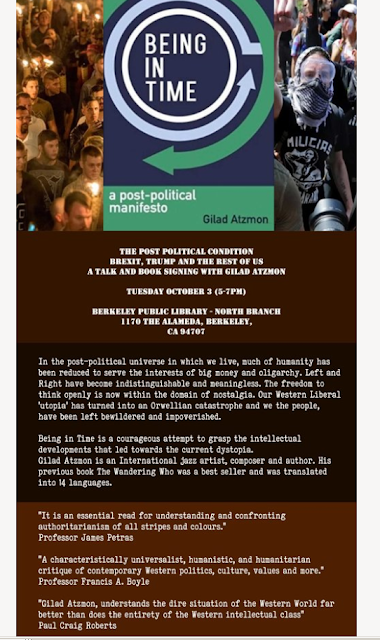 Several years ago,  Gilad Atzmon's Berkeley entourage showed up for his talk at the Berkeley Fellowship of Unitarian Universalist with a Hamas flag . Thats the caliber of his supporters. 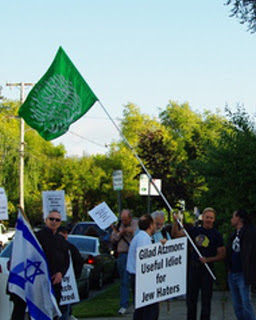 And yes, the loon with the Hamas flag is wearing a Nasrallah T-shirt.


Previous appearances of Atzmon in the Bay Area have been promoted by Paul Larudee of the International Solidarity Movement and other fringe groups.   No local group has claimed sponsorship for Atzmon's Berkeley appearance this week.

Are you appalled that our local public library is aiding and abetting this event?  Give them a call  (510) 981-6250.  Be polite- it's more than likely they have no idea what they are hosting.
Posted by Dusty at 6:36 AM

I'm sure the 5 or 6 UC Berkeley students who showed up to listen to his crap had a great time.

Never again was the holocaust, why do it to palestine.