Joel Mayorga, political cartoonist for UC Berkeley's student newspaper, the Daily Cal has hit the daily double of anti-Semitism. Mayorga has managed to squeeze both blood libel and conspiracy tropes into this cartoon commemorating Alan Dershowitz's talk at Cal. 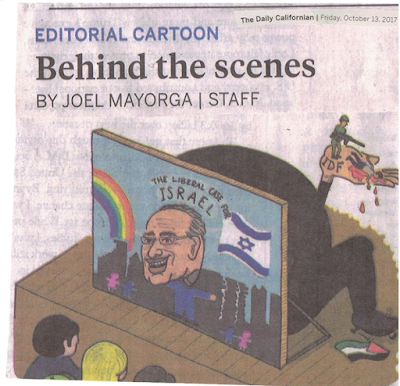 This cartoon appeared days after an op-ed in the same paper alleging "suppression" of Palestinian activism on campus.

The Daily Wire has an exclusive interview with Alan Dershowitz regarding the cartoon.  His reaction:

My first reaction was surprise that the official student newspaper of a major state university would publish a Dur Sturmer-type cartoon which would have fit comfortably into any Nazi publication.

My second reaction is what I’ve always believed, and that is, there is very little difference between the Nazis of the hard Right and the anti-Semites of the hard Left. This obviously was a hard Left neo-Nazi cartoon.

My third reaction is, I’m surprised that it was treated with as little response. Imagine if a comparably anti-black or anti-woman or anti-gay cartoon was ever published in the Berkeley student newspaper. Again, it reflects for me the incredible double standard in tolerance that people have toward anti-Semitism.

UPDATE
Students for Justice in Palestine at UC Berkeley has a post featuring the cartoon on their FaceBook page.  There is not a single comment condemning it. 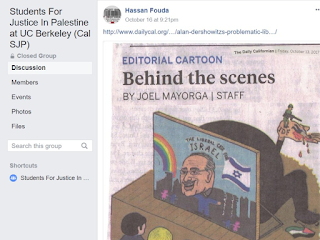 that's supposed to be Alan Dershowitz? this joel mayorga can't draw caricatures of faces worth a shit he looks more like Harry Truman here. with the recent news coming from the bakery of terror in Oakland and UC berkeley i think it was time for an FU posting dedicated to both. for anyone who's interested https://proisraelctu.blogspot.com/2017/10/speak-of-devil-its-reem-ass-il-from.html