New Yorkers take matters into their own hands

The passengers on New York's uptown 1 line at 50th Street looked around in shock. Every window and every advertisement on the train was covered in vile anti-Semitic graffiti, with swastikas and slogans including "Destroy Israel, Heil Hitler," and "Jews belong in the oven."
Then they sprung into action.

I got on the subway in Manhattan tonight and found a Swastika on every advertisement and every window. The train was silent as everyone stared at each other, uncomfortable and unsure what to do.

One guy got up and said, "Hand sanitizer gets rid of Sharpie. We need alcohol." He found some tissues and got to work.
I've never seen so many people simultaneously reach into their bags and pockets looking for tissues and Purel. Within about two minutes, all the Nazi symbolism was gone.
Nazi symbolism. On a public train. In New York City. In 2017.

"I guess this is Trump's America," said one passenger.

No sir, it's not. Not tonight and not ever. Not as long as stubborn New Yorkers have anything to say about it. 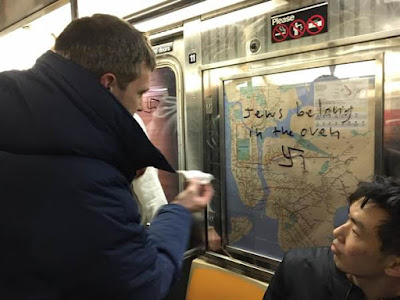 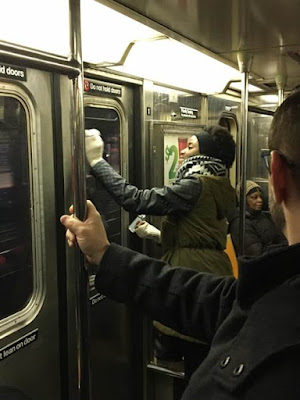 Check out the Times of Israel  and NBC News for more on this story.  There has been a recent spike in antisemitic activity nationwide following  Novembers election.

Email ThisBlogThis!Share to TwitterShare to FacebookShare to Pinterest
Labels: antisemitism in new York

Not so sure a bunch of anti-Semitic graffiti is the result of a "trumps world" kinda reality given the radical left's recent activities and outbursts from Berkeley to Washigton D.C. But that passenger's comment unfortunately still shows that the average American still hasn't picked up on how most anti-semitism today in The West today comes from the radical left.