The Electronic Intifada's "Rah Rah BDS is on a roll" end of the year list was particularly subdued this year. (No, I don't link to hate sites)

My comments in BOLD

Electronic Intifada claims: Activists rose up against Hewlett Packard. Campaigners in dozens of cities across six continents participated in an international week of action against Hewlett-Packard...

Yes, some cities had as much as a half dozen people holding signs.  And there was a hashtag. And a petition, too.  The net result?  See for yourself. 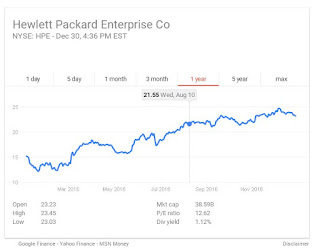 Electronic Intifada claims: Spanish municipalities declared themselves “apartheid-free zones.” More than 50 cities across Spain now declare themselves free of Israeli products in a campaign that began in July 2014...

Oops.  The Electronic Intifada left out a crucial bit of BDS fail information. From the October 5,  2016 J Post

In a massive blow to the Boycott, Divestment and Sanctions movement, a Spanish High Court of the Asturias region, upheld a decision last week, declaring a Langreo City Council agreement to boycott Israel illegal.

This marks the first time that a High Court in Spain has issued a judgment relating to BDS, thanks to the legal actions brought forth by ACOM, a pro-Israel lobby group working to combat BDS in Spain

Electronic Intifada claims: Churches continued to mobilize for Palestinian rights. Denominations voted in 2016 to boycott Israeli financial institutions, and to dump or bar investments in corporations that profit from Israel’s occupation.

A  single church in California vowed not to purchase supplies from Hewlett-Packard, a company that provides equipment to Israel’s military and settlements. This was a church that had previously taken a strong anti-Israel stand, and frequently hosted extremist speakers.

Electronic Intifada claims: Activists helped defeat anti-BDS legislation. Grassroots campaigners fought back against a growing wave of legislation promoted by US state and federal lawmakers – and encouraged by Israel lobby groups and the Israeli government – to suppress BDS activism.

In May, lawmakers in Ontario, Canada’s most populous province, made history: theirs was the world’s first full legislature to vote down an anti-BDS law...

Oops.The Electronic Intifada left out another crucial bit of BDS fail information. In December Ontario has become the first Canadian province to reject the Boycott, Divestment and Sanctions Movement

Electronic Intifada claims: G4S was forced to buckle under BDS pressure. Under years-long pressure by grassroots campaigns, the world’s largest private security firm, G4S, ditched most of its Israeli businesses.

The global security firm G4S sold its business in Israel as part of a portfolio review. 60 other businesses were sold as well.   The G4S statement on the sale

G4S reiterates that it does not support the anti-Israel boycott by BDS or any other group. The decision to sell G4S Israel was made on strategic and commercial grounds as part of a portfolio management program established by the company in 2013. Under its portfolio program G4S has sold or identified for sale 65 businesses which have combined revenues of £1.6 billion.
G4S also rejects BDS comments relating to the conduct of business by G4S Israel. As numerous independent reviews have confirmed, G4S Israel operates to the highest business standards. G4S Israel is a well-managed business that will grow and prosper under the right new owner, providing a positive future for our 8,000 colleagues in Israel and long-term service and support for our customers.
Electronic Intifada claims: Students stood strong. Students in the US, Canada and the UK passed strong divestment measures in their student governments and trade unions, amidst intensifying smear campaigns by outside Israel advocacy groups and shady websites.
Students in the US, the UK and Canada also rejected divestment measures. There is no indication that a single dollar of university money has ever been divested from targeted businesses

2016 was also a year when a record-breaking $1.127 billion in Israeli bonds were sold in the U.S. Since the program began in 1951, there have been over $40 billion dollars in global sales of Israeli bonds.  Sorry, Ali. Clearly rumors of Israel's impending isolation are overstated.