KHAN YOUNES, October 13, 2016 (WAFA) – Israeli troops stationed along the border with Gaza shot and killed on Monday night a 12-year-old child east of Khan Younis in the Gaza Strip, according to medical sources.
The Ministry of Health said Abdullah Abu Mudaif was shot and killed by Israeli soldiers near the border fence. Local sources said the shooting came from Kissufim military outpost.
In the meantime, Israeli forces opened a hail of gunfire at Palestinians' homes and lands to the east of Rafah in the southern Gaza Strip. There were no reports of casualties, however.
From Al Arabiya:
A 10-year-old Palestinian boy was killed along the Gazan border late Wednesday, with a Palestinian official and an eyewitness accusing Israel but the army denying any exchange of fire.
Ashraf al-Qudra, spokesman for the health ministry in the Gaza Strip, which is run by Islamist movement Hamas, said the boy died when Israeli troops fired across the border east of Khan Yunes in eastern Gaza.
"Abdullah al-Naseef, 10, was killed by (Israeli) occupation fire close to his house in the Qarara municipality, near Khan Yunes," he said.
An eyewitness said the Israeli army opened fire from a military base near Kissufim along the border.
An Israeli army spokeswoman denied there had been any firing across the border.
"We are not aware of any incident," she told AFP. It is unusual for Israel to deny confirmed exchanges of fire outright.
From Al Bawaba News:

A Palestinian child was allegedly killed by Israeli forces on Wednesday in the southern Gaza Strip evening, while Israeli authorities denied responsibility in his death.

Gaza Ministry of Health spokesperson Ashraf al-Qidra told Ma’an that 10-year-old Abdullah Nasser Atwa Abu Mdeif was shot in the back by a bullet on Wednesday evening in the al-Qarrara area east of Khan Yunis.

Abdallah Abu Nadif, 13-year-old boy from Alcarara in Gaza, was found dead yesterday
evening as a result of a shooting that took place at a wedding in the area. The Palestinians
are blaming Israel for this incident, but the truth is that the shooting did not come from
the Israeli side. We send our condolences to the family and for this unfortunate incident. 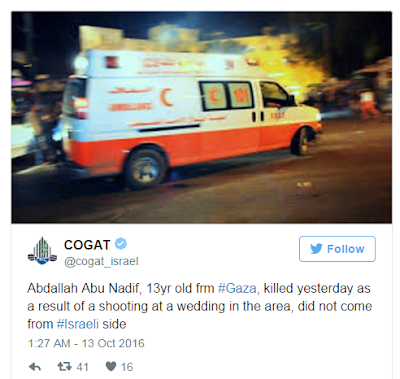 wanted to alert you to this sfgate article
http://www.sfgate.com/bayarea/article/SFSU-officials-condemn-posters-targeting-professor-9979326.php
note, not a single official acted in this fashion when the jew haters attacked mayor birkat.
nor did the chron do a story on that incident.
microcosm of the arab/israel conflict. silence when jews are attacked...outrage when jews fight back