US Israel Embassy moving to Jerusalem

Coinciding with the 70th anniversary of Israeli independence, the U.S. Embassy in Israel will move from Tel Aviv to Jerusalem in May of this year

At first, the embassy will be located in the U.S. Consulate in Jerusalem’s Arnona neighborhood. The site will be expanded next year, with the Consulate will eventually moving to new premises 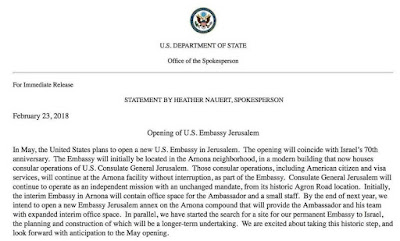 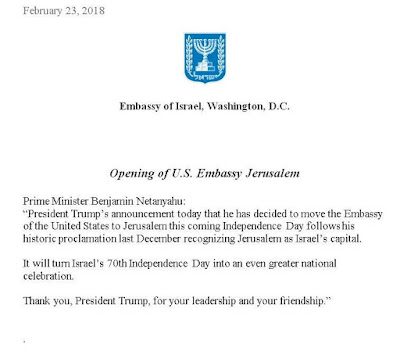 California Democrats for Peace and Justice

There is a new group on the scene, California Democrats for Peace and Justice,  who describe themselves as "Pro-Israel, Pro-Palestinian and pro-Engagement".

They've been compiling information on the California candidates stance on the Boycotts, Development and Sanctions movement against Israel. Its an important resource for voters.

In the race for California Attorney General:


In the Race for Lieutenant Governor:


In the race for California Governor:


We will update as more information becomes available.  And check out and "like' the California Democrats for Peace and Justice Facebook page
Posted by Dusty at 5:58 PM 1 comment:

U.C. Berkeley has had more than its share of anti-Semitic incidents. There have been anti-semitic flyers, swastikas carved into doors,  grotesque graffitti, and most recently, anti-Semitic tweets from  Cal Lecturer Hatem Bazian.  This weeks incident is just one in a series of attacks on the Cal Jewish community.

Earlier this week, a threatening message calling for the death of a Jewish professor was posted outside their Kroeber Hall office.

From the DailyCal, the student newspaper
Benjamin Brinner, faculty director for the Center for Jewish studies, said he received reports that the incident involved an anti-Semitic message posted outside of the office of a Jewish professor. Brinner said he believes this was especially disturbing as the threatening messages called for the death of a teacher.
“The message mentioned Hitler and called for killing the professor, using an extremely racist epithet for ‘Jew,’ ” Brinner said.
Brinner said he knows more students who have been affected by hate-related incidents like this than teachers, but he added that this type of anti-Semitic attacks is a “particularly ugly manifestation” of attack and is an ongoing problem.
“In instances such as this, the target is an individual; in other instances, a swastika or some other offensive statement is posted in a public place,” Brinner said.

Early this morning, an Iranian drone crossed into  Israeli airspace, and was immediately shot down by a combat helicopter. 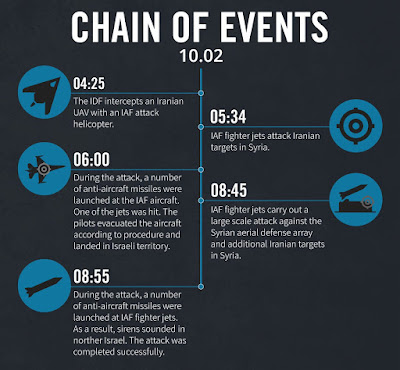 In response, Israel  then launched airstrikes on Syrian and Iranian targets in Syria, including the command and control center that launched the drone,  at an air base near Palmyra.

A  Israeli F-16 was shot down, reportedly by Russian made S200 missiles.

Reports indicate that the plane had 25 missiles launched against it, and took a hit, and lost its tail.  The heroic Israeli pilot was still able to fly the plane back into Israeli airspace, where he and the navigator ejected

In true New York Times fashion, the headline paints Israel as the aggressor.

From IDF Spokesperson Peter Lerner, via Twitter:
3 observations
1. First direct Iranian operation against Israel.
2. Iran and its proxies are preparing the battlefield of a future war.
3. Iranians in Syria means there are plenty targets for the IDF, the counter strike shows that Israel has operable intelligence.

🔴 3 observations
1. First direct Iranian operation against Israel. 2 Iran and its proxies are preparing the battlefield of a future war. 3 Iranians in Syria means there are plenty targets for the IDF, the counter strike shows that Israel has operable intelligence.
— LTC (R) Peter Lerner (@LTCPeterLerner) February 10, 2018

The Palestinians reacted to the news of the downed aircraft by passing out sweets. 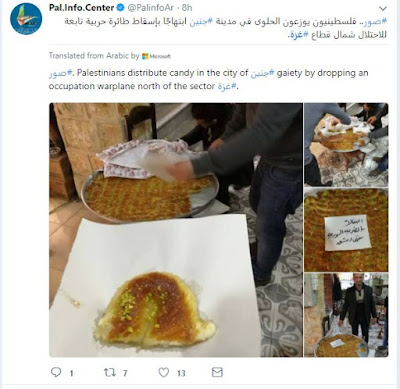 Israel has the right and the responsibility to protect its civilians. Israeli leaders have made it abundantly clear that they will respond as needed to any attack or provocation.

The mission was a resounding success, according to the IDF, who declared:

In total, the IDF targeted 12 military objectives, including 3 aerial defense batteries and 4 Iranian targets that are part of Iran's military establishment in Syria. “We carried out a wide-scale attack on the aerial defense system - radars, rockets, batteries, posts, and we performed a substantial strike, which as can be seen - they are trying to hide” says Brig. Gen. Amnon Ein Dar, Head of the Air Group in the IAF. According to Brig. Gen. Ein Dar, it is “the biggest and most significant attack the air force has carried out against Syrian air defenses since 1982.”