A Nation is Born; the View from San Francisco

Another reminder that while we have history, the other side has  "narrative".

May 14 1948, Israel's Independence day, as reported in the San Francisco Chronicle 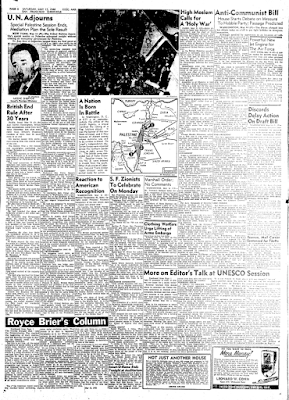 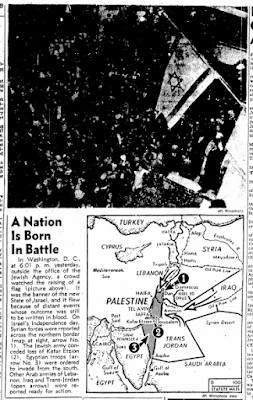 On  Israel’s independence day, Syrian forces were reported across the northern border (map at right arrow No. 1) The Jewish army conceded loss of Kefar Tzion (2) Egyptian Trops were ordered to invade from the South. Other Arab armies of Lebanon, Iraq and TransJordan were reported ready for action

The Arabs considered this a “Holy War”. Sheikh Mohamed Mamoun El-Shennawy, rector of  Al Azhar University and chief of the Moslem Theological institute announced  “The Hour for Jihad has struck”.adding “This is a holy war for the sake of Allah. He who dies for God will live forever at the side of the Lord”

S.F.Zionists to celebrate on Monday

Locally,   there were celebrations in the Jewish community, who declared “We are with you”
A local attorney, Bartley Crum declared  “We have fought long and hard for this day. There may be many obstacles ahead, but May 15 1948 will live in history with July 4 1776”
Rabbi Saul White called Israel’s independence   the “fulfillment of prophetic utterances of distant days”

Good luck with that

. . . and good luck with trying to find any place called "palestine" on any published geographic map. i was at a customer's warehouse making a delivery a few months ago when i noticed one of those large size world map posters on a wall. along the bottom it had an alphabetical listing of ever country in the world along with it's corresponding national flag. no problem finding Israel in the "i" section but mysteriously absent was any palestine in the "p" section. by the way what an amazing find this historical newspaper article is! aside from no mention of the any "palestinians" i like the corresponding article about an British rule coming to an end in palestine. all of which is further proof that Newt Gingrich was right about one thing when he said the "palestinians" are a fictitious people from a fictitious country. all that aside the arabs called the war against Israel a "Holy War" (jihad) and they lost (badly)so logically speaking wouldn't that make it allah's will that Israel should exist?