Not that long ago, San Francisco State had a well deserved reputation for being a scary place for pro-Israel and Jewish students. This is the school that displayed flyers featuring a Palestinian baby on a soup can label, captioned  "Palestinian Children Meat, slaughtered according to Jewish rites under American license".  This is the school where Jewish students were physically assaulted, spat on and screamed at  "Too bad Hitler didn't finish the job," "Get out or we will kill you," "F**k the Jews," "Die racist pigs." at a vigil commemorating the Holocaust.

It was never about free speech or academic freedom. It was pure racism, unbridled Jew-hatred, and had it been directed towards any other minority on campus, it would not have been tolerated.


From "Peace with Realism":

Laurie Zoloth, Professor of Ethics and Director of Jewish Studies at San Francisco State, reports that such posters, as well as posters proclaiming "Jews=Nazis," have become common. She also states: "I cannot fully express what it feels like to have to walk across campus daily, past posters of cans of soup with labels on them of drops of blood and dead babies, labeled 'canned Palestinian children meat, slaughtered according to Jewish rites.'"

In an open letter Zoloth described what happened at a "Peace in the Middle East" rally sponsored by SFSU Hillel on May 7, 2002 when a group of students, numbering around 50, remained to chant afternoon prayers. The following account has been confirmed by other witnesses:

Counter demonstrators poured into the plaza, screaming at the Jews to "Get out or we will kill you" and "Hitler did not finish the job." I turned to the police and to every administrator I could find and asked them to remove the counter demonstrators from the plaza, to maintain the separation of 100 feet that we had been promised. The police told me that they had been told not to arrest anyone, and that if they did, "it would start a riot." I told them that it already was a riot.

Finally, Fred Astren, the Northern California Hillel Director and I went up directly to speak with Dean Saffold, who was watching from her post a flight above us. She told us she would call in the SF police. But the police could do nothing more than surround the Jewish students and community members who were now trapped in a corner of the plaza, grouped under the flags of Israel, while an angry, out of control mob, literally chanting for our deaths, surrounded us. Dr. Astren and I went to stand with our students. This was neither free speech nor discourse, but raw, physical assault....

There was no safe way out of the Plaza. We had to be marched back to the Hillel House under armed S.F. police guard, and we had to have a police guard remain outside Hillel.


Apparently some are longing for a return to those days of infamy.

Last Thursday, a rally was held at San Francisco State to celebrate the 6th year anniversary of the Edward Said mural at the school  The 6th Annual Palestinian Mural Celebration  was entitled "We Speak for Ourselves; Honoring our Forebearers"      The event  was co-sponsored by the local Arab Resource Organizing center, and the Middle East Children's Alliance, as well as AMED , the Arab and Muslim Ethnicities and Diasporas program at SFSU. 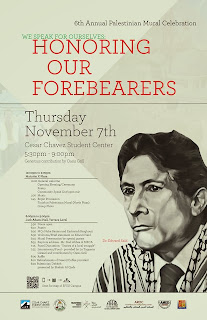 The program began in Malcolm X Plaza. There were tables adorned with kaffiyahs, and bumper stickers that read "End Israeli Apartheid" and "End US funding of Israel."  There were also tables for art projects. There were cans of spray paint and stencils glorifying convicted PFLP airline hijacker Leila Khaled, and there were stencils inciting extremism and murder.


Again San Francisco State crosses the line.  "My heroes have always killed colonizers" is an outrageous incitement to violence, doing nothing to promote intellectual discourse on campus.  Please contact the Office of the President Leslie Wong  to express your concern over these threats to campus climate, and your concern for the safety of students on campus
Posted by Dusty at 9:31 AM

This is a great website. Who runs this? I love to connect with you.

Who runs this site? Its great. Id love to connect.

Edward Said was a Palestinian ingrate who came to America to enjoy the fruits of this country and in turn trashed the West for its supposed lack of respect for the Arab world. There are plenty more like him in American universities especially in the Univ of California system.

Here is my cross-post. Thanks for the informative post.