Ever wonder why the anti-Israeli activists have shelved their high profile publicity stunts?  Its been many months since we've heard about a flotilla or a flytilla.   I'm guessing its because they've finally realized that the world isn't stupid.

Search for Gaza restaurants.  Look at their extensive menus and buffets.  Check out Palmera in Gaza City- known for its Bavarian pastries and cakes. (Yes, those photos are by the very same Sami Kishawi who bemoans the "siege" and "starving" and the children of Gaza)

Everything thing you need to know about the "siege" of Gaza  is below. From Sept. 8  through  Sept 14, 1,428 trucks carrying 38,545 tons of supplies entered Gaza. 2,882 people crossed through the Erez crossing. From the beginning of the year, 41,852 truckloads of supplies have entered Gaza, bringing a total of 1,159,552 tons of supplies 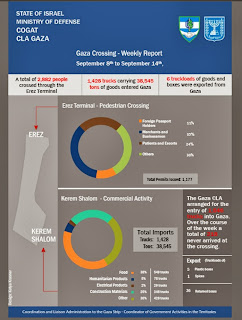 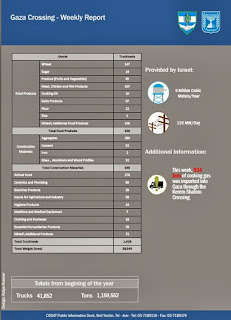