Jewish Voice for Peace gets noticed

The attention seeking group Jewish Voice for Peace must be glowing with pride. They've been noticed.

The strategy, as stated by JVP’s executive director Rebecca Vilkomerson, is to create “a wedge” within the American Jewish community to generate the impression of polarization over Israel.  The tactic is to dilute support for Israel in the Jewish community, toward the goal of reducing or eliminating the United States government’s economic, military, and political support for Israel.


That was followed by a report from the venerable Anti-Defamation League  stating:


The group’s positions on BDS, its willingness to partner with anti Israel organizations that deny Israel’s right to exist and legitimize terror, and its refusal to support a two state solution to the Israeli Palestinian conflict, demonstrate JVP’s hardline stance.

In fact, JVP consistently co-sponsors rallies to oppose Israeli military policy that are marked by signs and slogans comparing Israel to Nazi Germany, demonizing Jews and voicing support for groups like Hamas and Hezbollah. JVP has never condemned or sought to distance itself from these messages. Indeed, JVP’s Executive Director Rebecca Vilkomerson recently gave an interview to American Free Press a conspiracy-oriented anti- Semitic newspaper.


The unbridled hypocrisy of Jewish Voice for Peace may very well be their most defining characteristic. Both the NGO Monitor and the ADL report highlight JVP's willingness to partner with some of  the most extremist groups in the country. For all their "we are against the occupation" rhetoric, they have no trouble partnering  with some of the most committed Israel-haters out there- groups that would not accept the existence of Israel within any borders.

Just recently, in our own Bay area, JVP partnered with the Arab Resource Organizing Center for their Day of Rage against investment Giant Tiaa-Cref

In this announcement from the  Arab Resource Organizing Center, a  "Day of Divestment from Israel" is promoted, with "solidarity" groups JVP, Sabeel and the American Friends Service Committee (AFSC). Carol Sanders of JVP is listed the contact person.

How extreme is AROC? At the recent fundraiser for their Youth Group AYO, geared toward young Arabs ages 14-22, they featured bumper stickers  "Support the Intifada" - the uprising that left thousands of civilians dead on both sides of the conflict. Hardly the words of a peace group. 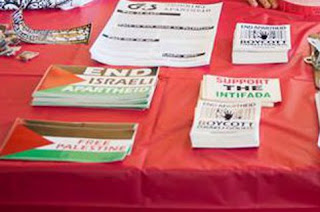 In spite of their grandiose self-serving proclamations regarding racism and anti-Semitism, the Los Angeles chapter of JVP promoted a May 17  event featuring the man who described the burning of synagogues as "a rational act",  notorious anti-Semite Gilad Atzmon.

Hosting BDS summer camps,  sponsoring rallies where "Zionist Scum your time has come" is chanted, aiding and abetting those that would destroy Israel as the state of the Jewish people- all in a days work for Jewish Voice for Peace.

I started making some phone calls today, with Rosh Hashanah approaching I believe that we need to demonstrate our voice for peace to the US government not to pursue Syria and usher in this New Year with shalom. I am reaching out to Jewish organizations all over the country in hopes of organizing rallies in our major cities to demonstrate. I hope we can quickly gain support. Can you help? I can be reached at ande1644@gmail.com