The Palestinians don't boycott Israel. Why should Americans?

Hundreds of thousands of permits are being issued to Palestinians from the West Bank who want to vacation in Israel for  Ramadan and Eid al-Fitr, the festival that marks the end of the fast .  Palestinian border crossings in every zone are opened to all who pass Israel’s security inspection. Busloads of of tourists have been leaving the cities of the West Bank every morning en route to Israel’s vacation sites, with an estimated million Palestinians expected to enter Israel ,  up from the 850,000 Palestinians who visited last year.

From  an article in Al monitor 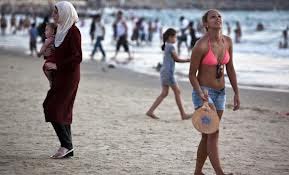 This policy of opening border crossings during holidays was first initiated and implemented a year ago by the chief of the Central Command, Maj. Gen. Nitzan Alon. Back then Alon claimed, and rightfully so, that given the decline in violence and the positive general atmosphere in the territories, there were no grounds to prevent tens of thousands of families from the West Bank from visiting Israel for reasons of security. On the contrary, Alon believed that these holiday outings would offer the people of the West Bank a new perspective on Israeli society, and that the encounter with Israelis could be a significant step toward re-establishing trust between the two peoples.


So much for Palestinians Civil Society.

And according to Maan, Jamal Jawabreh, secretary-general of the Chambers of Commerce and Industry, complained about the lack of travel restrictions, which has lead to Palestinian merchants shopping in Israel, and buying goods to resale in their own communities

Some were unhappy for other reasons.  From The Tower:

The Palestinian Authority minister for religious affairs. Mahmoud al-Habbash lashed out at his compatriots for preferring the bars and beaches of Tel Aviv to worshipful prayer. Habbash explained to Israel’s Maariv newspaper:

“On the Ramadan holiday, when we’re supposed to be growing closer to Allah, they obtain permits [to enter Israel] and go to the beach to flirt with immodest women.”
“No one said it’s forbidden to go to the beach or on vacation. We believe it’s possible to pray, fast and believe in Allah while also living normal, enjoyable lives,” he said, but added a caveat: “Everything has a limit. It’s not written anywhere that young people in their 20s are allowed to take advantage of their freedom to go to the bars of Tel Aviv, to dance and drink, to go to the beach and flirt with Jewish or non-Jewish girls, and to do things they will later regret.”


With one million Palestinians visiting Israel over the Ramadan holiday,  it begs the question. just who is this  "Palestinian Civil society" the BDS holes keep citing?
Posted by Dusty at 7:27 PM