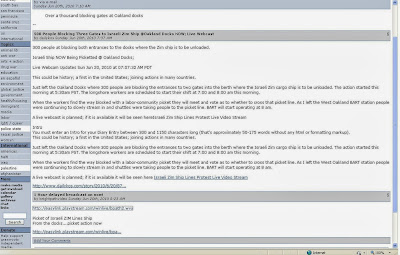 In a new low for Indybay, a website known for its inaccuracy and bias, attendance at an anti-Israel protest at the Oakland docks was misreported 3 times in the same article. Indybay claimed over 1,000 ,then 500 then 300 protesters in the same article. Click on the screen shot to see "independent reporting" at its personal best.
Streaming video and still shots show about 75 protesters. 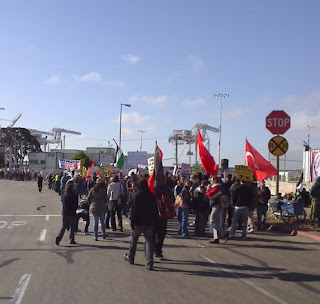 Yep, folks. Its a "historic" action, indeed. Imagine getting 75 protesters out of bed early on a Sunday morning without even their morning latte.

The protesters are now calling for another action at 4:00 pm. Hampered not only by deficiencies in basic counting, but in rudimentary online research as well, they have only just learned that the Zim Shenzhen is delayed in getting into Oakland. When do you think they'll figure out thats its flying under a UK flag?
Posted by Dusty at 9:07 AM

This is an epic event. The true colors of Israel are finally being shown and the entire world has nothing but disagreement and disapproval of Israel.

South African apartheid was wrong and Palestinian APARTHEID is WRONG!!!

With 1 and a quarter billion Muslims in the world and only 14 million Jews, Israel will always be in the minority. We know that. But we will continue to speak truth to power, as we have been for over 3,500 years.

those crybaby commandoes murdered people and then complained they were attacked. shame on israel.

truth WILL out israel, like at the port of oakland today! we are the champions, my friend.

The IHH and Hamas terrorists lay in wait and ambushed Israelis. Real peace activists don't stab young men in the stomach, eviserate them, then throw them off a boat. At least not peace activists from the Gandhi/King school of thought.

This entire non-event was much ado about nothing by a bunch of old Communists that come out for EVERY protest. The ship that they were theoretically protesting was a British flagged vessel non its way to China that WASN'T THERE YET. This entire public relations stunt was 75 wackos at an empty dock on a Sunday morning with no one else arround for miles. In my experience, the folks who are always out there to HATE Israel, rarely, if ever, actually tell the truth. However,this event was ultimately revealing about the positively delusional nature of these folks, just mad as a hatter.

Our objective was to boycott this ship for 24 hours, and we succeeded in doing that," said Richard Becker, with the ANSWER Coalition, one of the groups that organized the protest.


Oh, Little Dickie, if that was your objective, then you failed. After all, the ship arrived at 6:30pm and was unloaded this morning.

I agree completely! The anti-Jew tendencies of the Palestinian Authority are one of the most egregious offenses they have ever instituted against freedom, democracy, and the rights of man.

When will the Palestinians, AND the other Arabs, finally admit that the persecution of Jews in Jordan, Egypt, Syria, Lebanon, Iraq, and other neighboring countries, makes the Khaybar massacre look like child splay? When will they restitute the property of the Jews who were dispossessed?

Of course, they cannot do the latter - those robbed funds were used to found the PLO, so there is no chance of ever accounting for them. Even if Suha's books are audited. And the corruption of the PLO is legendary.

Still, the injustice that was done to the Jews from Arab lands ranks with the worst of Arab crimes, perhaps equal to their refusal to ever treat the Palestinians as equal citizens of Egypt, Syria, Lebanon, Iraq – and other Arab countries. Jordan even massacred them, killing more Palestinians during ‘Black September’ - one month! - than there were fatalities during the last century of Jewish-Arab strife. It’s utterly shocking!

Thank you for bringing this up, Absodom!

Oh, and it would probably be worth while to investigate the role of the Saudis and Qataris and their lackeys in funding extrmeist groups like ANSWER, Meca, and the ILWU.

As well as how the European Socialist Parties and their slavish sympathisers are funding and infiltrating Indymedia.