What are American Police Learning in Israel?

What are American police learning in Israel?   We've heard the lies spread by groups such as JVP and If Not Now.   CAIR also ran with the lies, and went as far as recommending that city governments:

"End police exchange and training programs with Israel and other foreign governments
that engage in human rights violations, including violence against protesters, choke
holds and other forms of police brutality"

in their publication "Ending Racist Police Violence in America" 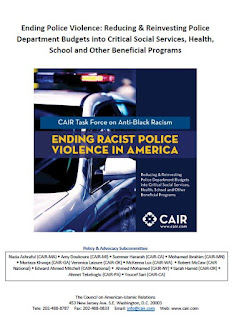 Has anyone thought to ask American police what they learned from visiting Israel?

In 1992, in an effort to secure the 1996 Olympic Games in Atlanta, Georgia State University and the law enforcement community established the Georgia International Law Enforcement Exchange (GILEE).

The participants from Georgia did not mince words describing their experiences in Israel.

Kimberly Payne, Major, Atlanta Police Department (2018)
The GILEE experience was one of the highlights of my career. This enriching and impactful experience enhanced my professional development as a leader. The experience with the Israel Police reaffirmed the need to create diversity within the agency so that it is a clear representation of the community served. This then helps gain public trust.”

“I was most impressed with the intensive training programs for the Israel Police. Integrity, professionalism, determination, and courage, protecting human life, and patriotism are among their core values"

“A clear priority, evident to all of us during our visit, was the sensitivity, awareness and commitment of the Israeli National Police Leadership toward ensuring every meeting with citizens, and every police/citizen encounter was focused on earning the trust of the community...Our pride in the brotherhood of Law Enforcement could not have been more inspired by those we met in the Israeli National Police. They are the pinnacle of professionalism, devotion to duty, and commitment to all people and religions. "

Rodney Bryant, Major, Atlanta Police Department (2014)
“One of our greatest challenges in American policing is serving a community that is vastly more diverse than the local police department. Comparatively, the Israeli police are responsible for serving a variety of demographics. I was impressed by the level of community policing efforts employed by the Israeli Police to build relationships and maintain peace among such diverse populations.

Steven D. Heaton, Chief, Fayetteville Police Department (2009)
“I think I can speak for the entire delegation when I say that this program was the highlight of many of our careers. The information learned and shared with our Israeli counterparts was invaluable. The Israel Police are one of the best trained, professional, warm, and accommodating group of people I have met"

The truth is out there. You just need to ask the right people.